Bhopal and The Khilafat Movement 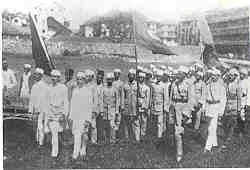 By 1910, “Little Hamid” had enrolled in the famous Muslim University at Aligarh; this represented an historic step for the Bhopal royal family, as he was the first of its members to be given a formal university education. He made his mark as an outstanding sportsman, a capable student and a natural leader of men. Soon, the short, stocky but handsome prince gathered around him a group of young Aligarh students who were academically high achievers and politically aware.

At Aligarh, a deeply emotional but vaguely focused solidarity with Turkish people absorbed the Muslim student body. At the time, Turkey was seen as an enemy by Britain and ended up opposing the allies in the First World War. Eventually, the Ottoman Emperor was vilified and deposed which led to the rise of the Khilafat movement among the Muslims of India. This movement calling for restoration of Ottoman sultanate, was a much anti British as it was based on nostalgia for the glory that the Indian Muslim had lost with the fall of the Moghul Empire. A similar fate was now being dealt to the magnificent Ottoman Empire. Therefore, decadent or otherwise, a surge of sympathy and support welled up among the Muslims of India in favor of the Turkish Emperor. Hamid and his Aligarh became deeply embroiled in the Khilafat movement whose leaders, Maulana Mohammad Ali, and his brother, Shaukat Ali, were frequent visitors to Bhopal as the young prince’s guests. Even the Begum felt sympathetic towards the Khilafat movement, partly because her favorite son had espoused their cause and partly out of a spiritual commitment to pan-Islamism and because of her memories of the affectionate treatment that the Turks had accorded to her during to Turkey.

Delicate warnings were conveyed by British officials to the Begum about the company that Hamid kept and about his political inclinations, but the Begum could no wrong in her youngest son and was almost as much under his spell as Shajehan had been under Siddiq Hassan’s. She paid little heed to these warnings, but reaffirmed her loyal support for the British imperial power by providing troops, cavalry and guns from Bhopal to the allied war efforts, on condition that they would not be used in the Turkish theatre of operations. The Bhopal military contingent fought with the allies in France and Mesopotamia. In fact the heir apparent accompanied the troops as far as Aden where he fell ill and had to be evacuated home. The Begum also raised 330,000 pounds, as a contribution from Bhopal to the Allied war efforts.

By the time Hamid graduated from Aligarh in 1915, the war was at its height and the Khilafat Movement in full swing. The Congress Party under Gandhi and Nehru was engaged in galvanizing educated Indians into supporting the independence movement while Mohammad Ali Jinnah was beginning to channel Indian Muslims in a similar direction.
By Bhopale - July 16, 2007 No comments:
Email ThisBlogThis!Share to TwitterShare to FacebookShare to Pinterest
Labels: History

By 1923, 200 years after Dost Mohammad Khan had founded the state, Bhopal presented a picture of settled, well governed, fair and tolerant society. Over the years, Bhopal had also developed its special culture, influenced by a century of women’s rule and their deliberate emphasis on simple living and caring governance. Bhopal’s dress was singular; the fashion set by the ruling family themselves. The men wore a safa (turban) for a headdress as it was considered improper to go around bare headed. These safas were four to six meters long and tied in the Rajputana style. Traditionally each major household selected a particular color and distinct style in tying its turban. Sultan Jahan selected turquoise as the color of her household and at ceremonial occasions her entourage consisted of men dressed in white sherwanis and turquoise safas. With the passage of time the common folk in the street soon took to the Turkish cap, especially after Sultan Jahan returned from Turkey.

Up to the time of Bhopal’s merger with the Indian union, Bhopali Muslims wore the soft, dark red Turkish cap with a black tassel (in contrast with the hard, bright red Turkish cap worn in Egypt or Bahawalpur). For formal occasions, men wore sherwanis with white cotton pyjamas that were neither too tightly fitted (like the choori-dar pyjama of United Provinces) nor too loose (like the flabby, Allahabad style pyjama). Only women in the home wore the shalwar prevalent today in Pakistan. The Hindu community wore the dhoti at home, but wore pyjamas with Jodhpur-style coats outside and on formal occasions. As a headdress they too wore safas but not the Turkish cap. Instead they wore the white, boat-like Nehru cap. The Bhopali women also adopted a distinctive dress, which was graceful, and elegant. It consisted of a Turkish-style kurta that flared in a circle flowing down from a tight fitting waist. The kurta was made of the finest cloth, often bordered with golden and silver linings. In addition, Bhopali women carried a dopatta that measured 4.5 meters elegantly carried across the body and over the shoulder. These dresses were sewn by special seamstresses and dyed to matching and dyed to matching and contrasting colors with the pyjamas. Unlike the men, women wore tight calf-hugging pyjamas made from rich colored material.

In the field of literature, Bhopal’s special culture produced its own accent in spoken Urdu and Hindustani and a lexicon of words that are typically Bhopali and barely understood in other parts of India. Bhopal produced its erudite scholars, poets and religious philosophers, but typical of Bhopal was the tradition of non-Muslims writing Urdu and Farsi prose and poetry. Shahzad Masih, the Bourbon, was a poet who wrote under the nom de plume of Fitrat.

There were also settlers of Portuguese extraction who composed in Urdu poetry so that Bhopal’s Urdu and Farsi literati included somewhat incongruous names of Hakeem Ilyas De Silva, Thomas Batista and a lady named Flora Sakis.

Shikar, especially big game, was abundantly available in Bhopal and was a pastime for most people who could afford to maintain a gun. Apart from shikar, Bhopal was famous for polo – Hamidullah having an outstanding nine-goal handicap - and for field hockey, which, somehow, caught the imagination of the common man. Bhopal became famous as a home of hockey with the legendary Bhopal Wanderers winning every major tournament in India. By 1923, a yacht club was built and sailing became a fascinating sport for the gentry while the townsfolk sat crouched around the lakeside, placing bets on the boats racing in the regattas.
By Bhopale - July 09, 2007 No comments:
Email ThisBlogThis!Share to TwitterShare to FacebookShare to Pinterest
Labels: Culture

As said earlier while recounting Bhopal's history, concerned at her daughter’s mismatch and her expansive love life and with images of her own turbulent marriage rolling through her mind, Sikander Begum was worried about her granddaughter’s future. Her search for the ideal consort for an ideal match ended with 12-year-old Ahmad Ali Khan. She invited his mother Mohammadi Begum and his sister Chanda Bi, to settle in Bhopal. Chanda Bi married another Jalalabadi noble, Miyan Wilayat Ali Khan, with whom she had seven daughters and three sons. The seven daughters grew up into beautiful women, four of them being exceptionally alluring. Perhaps with the exception of Rani Kamlapati (read about her here), Bhopal had never known such beauty. The Jalalabadi girls became the rage of Bhopal with royal scions, jagirdars and noblemen falling over themselves to gain the hands of these delectable maidens.

As soon as Sultan Jahan had taken effective control of the state, her husband Ahmad Ali Khan (Sultan Doulah) began insisting on the wedding ceremonies of their grown-up sons, Nasarullah and Obaidullah. Egged on by Sultan Doulah, two daughters of Chanda Bi Qaisar Dulhan and Shaharyar Dulhan were chosen as brides Nasrullah’s and Obaidullah’s bride respectively. Sultan Jahan was not so keen on this alliance, mainly due to her deep-seated dislike of her Jalalabadi in-laws. Six months after Sultan Jahan became Begum, she suffered another personal tragedy. In December 1901, during the holy month of Ramadhan, the Begum left her husband well past midnight writing out personal invitations to the wedding ceremonies. At sehri (the pre-dawn meal before beginning the fast), Sultan Jahan sent a servant to the Nawab’s chambers for a wake-up call. The servant returned stating that the Nawab was slumped in his chair and could not be roused. Sultan Jahan rushed to her husband and found him dead, evidently from a massive heart attack. As soon as the period of mourning was over, on 17 January 1902, the double marriage of Nasrullah and Obeidullah was celebrated. Nasrullah and Obeidullah moved to their own palaces on Eidgah and Shamla hills, leaving Sultan Jahan to bring up her eight-year-old favorite son Hamidullah. The Bhopal gentry quickly lapped up the remaining Jalaalbadi girls. Within few years, all seven Jalalabadi daughters were married to the royal princes, to Umrao Doulah’s grandson and to Jalalabadi jagirdars, spreading their influence right across Bhopal’s political landscape.

After Sultan Jahan returned from Hajj in 1904, it was apparent that a qualitative change in her family relationship had been brought about by the birth of Nasrullah and Obaidullah’s children from their Jalalabadi wives. It did not take long for the shrewd and far-sighted Sultan Jahan to realize that the Jalalabadi’s were assuming a dominant influence in Bhopal through marriages to the most important scions of Bhopal. The Jalalabadi’s were already preparing an engagement between Hamid and the youngest of Chanda Bi’s daughters when Sultan Jahan read the danger signals of a complete Jalalabadi takeover of her family and decided that Hamid must break out of the traditional, conservative, Bhopal-bound gridlock. With the changing times, Sultan Jahan was aware of the indigenous political thinkers who were emerging on the scene in India after the birth of the Congress party and Muslim League. For Hamid, Sultan Jahan conceived an entirely different game plan with a boarding school education, a tough apprenticeship in politics and insulation from feudal influence. To stop 11-year-old Hamid’s marriage to any local family, she sent a trusted emissary, Qandhari Khan, to North West Frontier province in search of an ideal bride. It is said that while visiting one of the noble Afghan families of Peshawar, Qandhari Khan saw a beautiful little child taking an impromptu shower under a tap. The five year old girl was extremely fair had large brown hair and the most winsome features. An enchanted Qandhari made enquiries to find out that she was Maimoona Sultan and her great-grandfather, Shah Shuja, was the deposed king of Afghanistan in 1812. His family had subsequently taken residence in Peshawar who traced their lineage directly to Ahmad Shah Abdali, the victor over the Marhattas in the famous Battle Of Panipat in 1761.

Sultan Jana lost no time in completing arrangements for the betrothal and subsequent marriage of Hamidullah with Maimoona Sultan. The Nikah was celebrated in Peshawar on 5th September 1905 by a wedding party headed by Obaidullah Khan and other dignitaries amid great pomp and gusto firing canons and muskets in the air and bringing on the drummers, elephants, horses and camels.
By Bhopale - July 01, 2007 1 comment:
Email ThisBlogThis!Share to TwitterShare to FacebookShare to Pinterest
Labels: History
Newer Posts Older Posts Home
Subscribe to: Posts (Atom)