A QUARTER of a century back, passing through the graveyard behind old Saifia College to take a shortcut to Bhopal Talkies square, we students always noticed the huge stone slab on a grave with meticulously carved lines of the board game solah-gota, the local variant of Chinese chequers. Often we wondered what kind of people had the courage to play games in a graveyard (and time to carve stones for the purpose instead of just using chalk or charcoal). Looking back, it seems that there could not have been a better place to indulge in one of the favourite pastimes of the Bhopalis under the cool shade of the huge tamarind and custard apple trees; away from the din of the streets and constant nagging by wives and children. Nobody disturbed them in the graveyard; those resting there permanently the least. 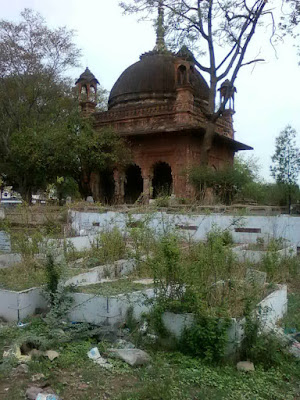 This was the lonely place where a lecturer, also taking a shortcut, once accidentally came face to face with a college bully whom he had admonished in the classroom earlier for boorish behaviour. The lecturer, his heart in his mouth, thought he too would soon be resting in peace at the spot. To his surprised relief however, the bully folded his hands and tendered a sincere apology. Bully he might have been, he did not have the moral courage to apologise in public.

This graveyard was not the only place where the game was played with utmost seriousness. Nor was this the only board game played by the people. By the end of the 1960s, women in Bhopal had given up playing the ancient game of Chopad or Chausar. It is a matter of research as to what took people away from the game royal. Radio and cinema had arrived much earlier without making a dent at the popularity of the game and TV did not arrive until 1982. Moreover, other board games like Nau-gota, Solah-gota (played with nine and 16 pieces respectively), Changay-ashtay (another board game), chess and carrom continued to be popular. Why then only Chausar vanished?

Returning to our subject, when these local board games were the cheapest and most popular sources of entertainment for the poor and the middle classes, it was not uncommon to hear women calling their adolescent girls, “Manhoos, tu phir Bua ki ladki ke saath changay-ashtay khelnay chali gayee. Hum razai main doray daalnay ke liye pareshan ho rahe hain. Tujhay kya fikr.”

What one needed to play these games were a companion, a chalk or charcoal piece to draw the board, a few tamarind seeds (called ‘chiyen’) broken in two halves, and pieces made of anything under the sun like broken bangles, small stones or kernels of palm-date and Jamun. Then flowed terms like ‘goat khulna’, kachhi goat, pakki goat, toad hona, laal hona, sookhi maat, geeli maat, cheenta-cheenta baithna and the like. Even mini-tournaments were held and contestants, like today’s hi-tech sports coaches, used palms as computers to draw sketches for various moves.

‘Naqshay banana’ they called it.

The games were played on roadside patiyas all over the town and of course in homes. Children happily spent their summer vacations playing these games. But some of the places where these games continued uninterrupted almost round the clock were Fire Brigade (the fire-fighters returned to restart from where they had left after dousing fire in some part of the town!), tonga stands, taxi stands, the boundary wall of Kamala Park, Yadgar-e-Shahjahani Park, the other small parks, the graveyards of course, under the tamarind tree beside the Upper Lake, in ‘deorhis’ (the entrance passages of old houses), Yacht Club, filtration plant and the government offices where only the employees played.

Television and televised cricket then devoured these innocent pastimes of innocent people.