While most Hindus end their Dussehra celebrations by burning the effigy of Ravana to symbolise the victory of good over evil, the 10-headed demon king of Hindu mythology is worshipped in two Madhya Pradesh districts. When temples across the nation will resonate with prayers to lord Ram Monday, a small temple to Ravana in Vidisha district’s Ravangram village will echo with the prayer, “Ravana Baba Namah”. The temple has an ancient idol of Ravana in a reclining position believed to have been constructed between the ninth and 14th century. The villagers believe it would be a bad omen to have the 10-foot idol stand erect and say that whenever this was done, some unexpected incident had occurred in the district. In the village, the demon king has been worshipped as a symbol of prosperity for over 600 years by Kanyakubja Brahmins, a Brahmin sub-sect to which Ravana was believed to have belonged. He is regarded as a scholar and people worshipping him believe burning the learned king, who knew all the Vedas (ancient Hindu scriptures) and was a devotee of lord Shiva, is not justified. This is not restricted to Ravangram village. Ravana is also worshiped in Ravana Rundi in Mandsaur district and Shajapur district’s Bhadkhedi.

In Mandsaur town, members belonging to the Namdeo Vaishnav Samaj, a Hindu sect, who worship the demon king on Dussehra, believe Ravana’s wife Mandodari belonged to the town and they regard him as a son-in-law. A 35-foot high 10-headed Ravana statue was installed in 2005 at Ravana Rundi in the Khanpur area of Mandsaur. A 25-foot high lime and brick ancient idol of Ravana existed there till 1982. It developed cracks due to lightning and was ultimately destroyed. The idol is worshipped every year and women in the area remain behind the veil on Dussehra since they regard Ravana as their son-in-law, while men make offerings at his statue if their wishes came true. Ravana and his son Meghnad are similarly worshipped at Bhadkhedi village in Shajapur district of western Madhya Pradesh. Indore-based Rajesh Batham, who has been worshipping Ravana since his ancestors did so, believes that burning him is not right. He informed that the demon king’s idol is decorated in Shajapur every year on Dussehra and not burnt. He said this was also the case in Rajasthan’s Hadauti village, while Gond tribals of Chhattisgarh also have a tradition of worshipping ‘Lankapati (King of Lanka)’. According to mythology, Ravana was the grandson of the creator of the universe, Brahma, son of the sage Vishrava and younger brother of Kubera, the deity of wealth. He is also believed to have been a scholar, connoisseur of arts and a devout follower of Shiva. Ravana is credited by many for writing a commentary on the Vedas and verses on medicine.

By Bhopale - September 28, 2009 No comments:
Email ThisBlogThis!Share to TwitterShare to FacebookShare to Pinterest
Labels: Contemporary 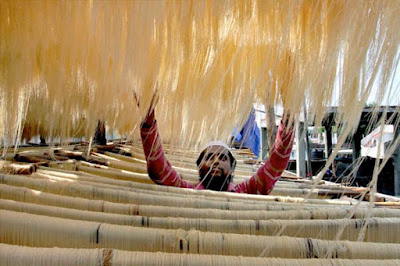 Bhopale.blogspot wishes
all its readers and visitors
Eid Mubarak

(Photograph Sewaiyan at Bhopal)
By Bhopale - September 21, 2009 No comments:
Email ThisBlogThis!Share to TwitterShare to FacebookShare to Pinterest
Labels: Contemporary

In Solidarity With All Holy Cows! 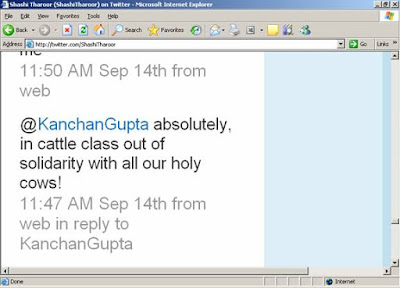 At 11.27 in the morning of September 14, veteran journalist Kanchan Gupta asked Minister of State for External Affairs Shashi Tharoor a question: 'Tell us Minister, next time you travel to Kerala , will it be cattle class?'Twenty minutes later the minister,responded: 'Absolutely, in cattle class out of solidarity with all our holy cows!'Twelve words -- or, in Twitter measure, 71 characters -- that have led to a veritable storm that, despite Tharoor's September 18 apology, continues to be 'Breaking News' on our television channels, fuel endless 'debates' on prime time.

Joining the band wagon, Madhya Pradesh Chief Minister Shivraj Singh Chauhan stated : "I believe that in a democracy, people are God. To refer to them as 'cattle' is an insult to them. And I believe that such a person has no no right to be a Union minister," he told reporters.

But, Cattle - as in 'Gau bansh'- is holy and Gau mata is God, no? The BJP has for long been the sole certified protector of the cattle class - that is the class of God, but this statement creates some confusion.

Shivrajji goes on to state "I believe that in a democracy, people are God. To refer to them as 'cattle' is an insult to them. And I believe that such a person has no no right to be a Union minister. And if he says that to sit in economy class is like being cattle, then Shashi Tharoorji, those people who travel economy class are very big people". 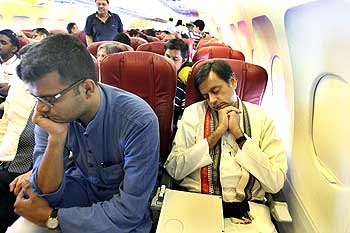 The Times of India published this photograph of Mr Shashi Tharoor crumpled up in sleep in an economy class seat August 9, which you can see alongside.

So does this make Shashi Tharoor one of the Big people - Shivrajji, and how come he is insulting himself? Does this also mean that no one in the BJP after Jaswant Singh knows (or cannot find out) that cattle class is colloquialism for “economy class” and not a neologism invented by Tharoor?
By Bhopale - September 19, 2009 No comments:
Email ThisBlogThis!Share to TwitterShare to FacebookShare to Pinterest
Labels: Contemporary 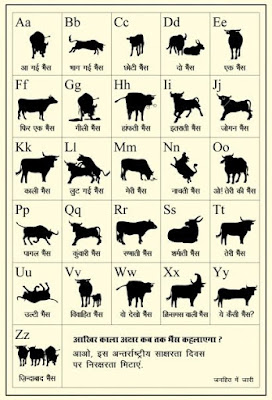