The Business Of Gas

Jahar Lal doesn’t remember the night of the Bhopal gas tragedy, but he can’t forget it either. He was born on the side of a road, as his mother fled from the poisonous gases that swept through old Bhopal. When she finally reached a hospital with her newborn son, the doctors there christened him Jahar, or poison. The name stuck. He doesn’t like his name much. He has often thought of changing it but, he says, “It’s the name I’m famous by.” It draws 10-15 people every month to his small jhuggi in the mud-spattered lanes of Oriya basti.

More has been written on the Bhopal gas tragedy than any other disaster in India. In the 25 years that have elapsed, activists and government officials have surveyed the affected areas numerous times; curious tourists have wandered through the bastis in search of survivors’ tales; and journalists from around the world have scoured Bhopal for stories.The intense attention has, in its wake, created a network of attractions and occupations that survive on the memories, sites and effects of the disaster.

“There’s a whole chapter on me in Dominique Lapierre’s book,” says Gangaram, a gnarled old man, as we walk through the Oriya basti in search of Jahar Lal. He was also affected by the disaster and now survives on a few part-time jobs.He volunteers in a small community school in the Oriya basti, does the odd painting job, and spends his remaining time working as a guide for curious visitors.
“Everyone who comes to this part of Bhopal comes to me,” he says matter-of-factly. When we get to him, Jahar Lal is playing cards with a few friends. His clothes are threadbare, his sandals broken and he’s thin as a stick. He might be an attraction, but it hasn’t brought him much money. He works as a construction labourer for the 10-12 days he manages to get work.
But, he complains, he gets tired easily, suffers from a chronic cough and can’t put on any weight. The people of the basti are used to visitors, but a gaggle of kids still collects around us. Has the attention he’s got made a difference to his life? “People have been coming to see me for 10 years now, but nothing has happened,” he says. Someday, he hopes, someone will read one of the articles and give him a job. As we leave, Jahar Lal comes up to us and asks if we can spare Rs100 for “some medicines”.

A few kilometres away, Sanjay Verma is taking a foreign television crew through Arif Nagar, a shanty sprawl that sits by what used to be the solar evaporation pond of Union Carbide. He is their translator-cum-guide. Sanjay lost seven members of his family in the tragedy, and grew up in an orphanage in Bhopal.
He has taught himself fluent English, and now shows visitors the sites associated with Union Carbide. He is pursuing a degree in business economics, but has been guiding people for nearly four years now. On average, he takes 100 visitors around every year. It’s a good source of income for him.
His charges are Rs700 per day, but often “people give me much more than that”. His English has also improved significantly in the process. It was initially very difficult for him to return to the sites associated with his personal tragedy, but now he has gotten used to it.
“I feel that information on Bhopal needs to be passed on,” he says. Most media crews he takes to the factory, he adds, are horrified that the factory remains the way it was 25 years after the disaster.

But not everyone in this small network suffered in the tragedy. For every person that did suffer, there is another for whom this is a quick business opportunity. Mac is a resident of Bhopal who refuses to give me his real name. When we spot him, he is tearing down the dirt road in front of Jaiprakash Nagar with Miguel Legault, a photojournalist, perched precariously on his two-wheeler. 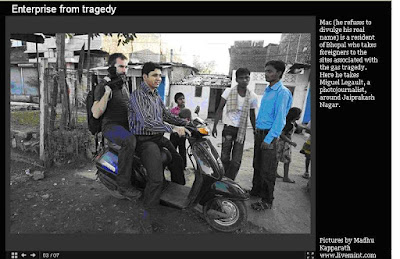 He claims to work in the pharmaceutical industry. He’s shown six people, including a Korean tourist, around affected areas such as Annu Nagar and Blue Moon Colony this year. “More often than not,” he says, “I’m the driver, guide and translator. I even get them a bottle of beer when they ask for it.”
In return he gets “some kind of gifts”. His motives, he claims, are not monetary. He wants to break the stranglehold that a few non-governmental organizations have on tragedy-related work. “Most of them get a lot of money through donations but promote a few people like Rashida Bee (profiled in Monday’s Mint story),” he says. “But this was a tragedy for everyone in Bhopal, not just a few people.”
His endeavour, he says, is to show people the neglected aspects of the tragedy. Mac seems to have forgotten that I’d seen him and Miguel briefly at Rashida Bee’s the previous day.
How do people find him? “You come to Bhopal and tell anyone that you want to see the Union Carbide factory, and you’ll find Mac,” he says cryptically.

Travel agencies in Bhopal also seem to have caught on to the opportunity. When I called him up, Rakesh Chopra of Radiant Travels Pvt. Ltd, one of the larger travel agencies in the city, said that he could easily arrange a guide for these areas. “We’ve shown many tourists these sights,” he says.
A guide would cost Rs1,750 per day. The biggest gains of this “industry”, however, have gone to the hundreds of dubious doctors, jhola chaap doctors as they are known in local parlance, who’ve set up shop along Chhola Road, a stone’s throw away from the factory. Every third establishment on the road is a clinic.
They sit cheek by jowl with tea shops, butchers and grocery stores. The garishly lit, matchbox rooms that they work from are crowded with a steady stream of patients. A bewildering number of them have degrees in Ayurveda.
Anil Tiwari claims that he is the only qualified doctor among the 85 who practise on this 2km stretch of road. “Doctors here get Ayurveda degrees since they’re easy to get, but all of them prescribe allopathic medicines,” he says. The majority of patients at the clinics seem to have a similar roster of problems— breathlessness, body aches, skin rashes and eye problems. They say that their problems started after the gas tragedy, but a number also blame severe groundwater contamination. “These quacks earn Rs1-2 lakh per month,” says Dr Tiwari, “and they pump patients full of steroids.”
P.D. Israni of Israni Dawakhana, was giving a woman an injection when I walked in. He claims to have a bachelor in Ayurvedic medicine and surgery (BAMS) and tells me that he only prescribes medicines according to his qualifications.
His charges per patient are Rs10-20. When I ask him about the injection he was giving, he turns defensive. “What can I do if the patient asks?” A hundred metres down the road, outside the Singhai Clinic, which advertises the services of Dr Singhai, BSc, BAMS, Ayur-Ratan, a patient is complaining.
He shows me a prescription that consists of a series of codes that only the in-house chemist understands. The medicines he takes out of a small plastic packet are allopathic, but none has a name. A similar story is repeated at every clinic in the area.
Patients who are entitled to free treatment at government hospitals don’t go there since the wait can often be long and the paperwork complicated. Some of them have also misplaced their “gas cards” and haven’t been able to get new ones made. They’re left with no alternative but to go to these clinics, they say.
K.K. Dubey, director of the Kamala Nehru Hospital, a government hospital for the gas-affected, confirms that such clinics are scattered across the affected wards. “The government has done nothing to control them,” he says.

The Bhopal gas tragedy seems to be becoming a small business. And as the 25th anniversary of disaster comes up, the profits are looking good.