As the humble chawanni receives a nostalgia-soaked send-off from many Indians following the Reserve Bank’s refusal to give it any more quarter, some are ready to put up a last stand for the little guy-turned overnight hero.

A BJP activist from Indore has moved court alleging the 25-paisa coin’s withdrawal from June 30 is illegal, while many others are dismayed at the silence of politicians and civil society on what they see as a “momentous decision with major financial implications”. 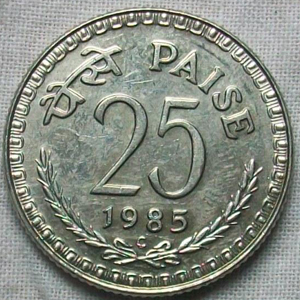 One hitch is already being encountered in Madhya Pradesh’s post offices, which are charging 50 paise for the 25-paisa stamps that carry Jawaharlal Nehru’s picture and are used mainly to send medical literature and newspapers by book-post.

Paan shops and small groceries have been rounding off the bills, as are petrol pumps for those two-wheeler riders who buy in small amounts. Neighbourhood photocopiers have raised the rate from 75 paise to a full rupee, the bara aana now having died with its lifeblood, the chawanni.

If all this sounds like small change, Bhopal-based industrialist and former head of a chamber of commerce, Rajendra Kothari, disagrees. He estimates that consumers in Madhya Pradesh would be losing Rs 700 crore a year because the 25-paisa coin has been abolished as legal tender.

His charge against finance minister Pranab Mukherjee, under whose watch the decision came, is that “no thought was given” to the fact that levies like service tax and value-added tax are calculated “in rupees and paise”.
“So, customers are being forced to pay extra for no fault of theirs,” Kothari said.

Bhopal civil judge Varsha Sharma has issued a notice to the RBI after BJP activist Anil Bhargava sought a stay on the chawanni’s withdrawal.

“Even some medicines are priced in rupees and paise. If the government doesn’t want the chawanni, why can it not announce that anything cheaper than 50 paise will not be charged and that anything over 50 paise will cost a whole rupee? It will at least even out customers’ expenses,” Bhargava said.

They will not admit it but at bottom, the reactions of Bhargava and Kothari may have less to do with economic arguments and more with sentimental affection for the underdog and nostalgia for a time when it counted for something.

Since last week, many ordinary Indians and celebrities have flooded social networking sites with laments for the quarter, recalling its role as their “tiffin allowance” at school, good enough to buy an ice-cream or chocolate bar —or at least a lozenge or toffee, if the writers are younger. Older Calcuttans will remember that the lowest tram fare was 25 paise even 30 years ago.

For all that, the use of the coins, introduced in 1950, had already gone down because of inflation and very few people seemed to have any to return to the banks on June 29 (unless they were holding on to them as keepsakes).


I came to Bhopal in 1942 to stay with my brother Jamil Ansari, a journalist. He was the Reuters representative in Bhopal. But he was given many other jobs by Nawab Hamidullah Khan whose favourite he was. I was admitted in Cambridge School, Bhopal which was then the best school with an English principal and an excellent south Indian faculty.

Nawab Sahab’s family members and the children of the gentry studied in Cambridge School. It was a five-minute walk from my brother’s residence. The house we lived in was called Firoza Kothi. It was situated between two important roads – one going to the airport; the other going past the lake towards Ahmedabad, the area where the ministers had their residences and the Nawab, his palace.

Firoza Kothi had a view of the famous Bhopal Lake  and an ancient graveyard.  One could see the scenic view of Shimla Hills. What really interested me was the traffic that went past Firoza Kothi in the evening. I sat in the verandah overlooking the road. Bhopal being a hilly city with ups and downs favoured jeeps rather than cars.

I’d love to see the jeeps laden with ladies with colourful dresses going to the palace. Most of these women had scanty education, but not one could excel them in choosing the best colours for their elegant Bhopali dresses.

I admired these ladies when the famous Obaidullah Khan hockey tournament took place. Some women really enjoyed the game but most came to socialize and to display their dresses and jewellery.

Bhopal Talkies was another favourite venue where there was a very small royal box and one had to reserve seats well in advance. The ladies had their accommodation but it was too noisy with bawling children and regular fights amongst occupants. They knew the choicest abuses and flung them generously at each other. The men complained about the noise and a sound proof screen was installed to prevent the shouts and screams from disturbing the men.

One major event for the women of Bhopal was the Meena Bazaar where once again one had the chance of admiring the dresses of these women who looked so elegant and sophisticated but were uneducated.
Of course, one has to discuss the Bias separately. They were either ladies related to the royal family or were from old prestigious Bhopali families. They were very cultured and somewhat educated. Some gathered around the Nawab, some were devotees of the very cultured Her Highness (Hamidullah Khan’s first wife) and the younger Bias favoured the company of Badi Bia, the very interesting and gifted heir apparent of Bhopal.

So much for the social life of Bhopali women -- all I can say about the men is that they were mostly landowners and loved their shikars. There were the outsiders like my family who intermingled with Bhopalis but retained their own culture. Our dress, food and language were different.

I have to talk about the city of mosques, the wonderful landscapes and of course, the Bhopal lake. When I came to Bhopal I fell in love with its natural beauty. It was lush green with ups and downs. The rainy season added beauty to the city. Heavy downpours lasting for days gave us many holidays from school. Shimla Hills was beautiful with trees and other greenery. There were very few houses on Idgah Hills but the rocks were covered with custard apple trees which we loved to raid.

The weather became so cool during the monsoon that relatives from all over India came to stay with us. The Bhopal Lake was always full. Yatching was a favourite sport. In the midst of the lake was a Yatch Club, we’d love to go to enjoy fries and pakodas.

After passing the High School examination I went to College in Lucknow and spent only holidays in Bhopal. The Nawab gave me the Lucrative Obaidullah Khan Scholarship. I went to England and married a Pakistani and had to leave my country.

I prospered in Pakistan and earned the reputation of a good literature teacher. In the famous Karachi Grammar School I taught some famous people such as Benazir Bhutto and her brother Murtaza. Benazir and her brother were very close to me because they were my neighbours as well.

I had some differences with my husband and once again after a long gap I came to stay in Bhopal with my sister who was the principal of our old school. Cambridge School had become the haunt of children who were ill-mannered and uncouth. The standard of education had fallen drastically.

During my long absence Bhopal had undergone an unfortunate transformation. Of course, being the capital of Madhya Pradesh the population had increased, new houses had been built, trees had been pulled down, rocks had been shattered. Idgah Hills had no custard apple trees. Ugly houses had sprung up.
Ahmedabad was a ruin. The palace had been turned into a college. No Bias frequented Ahmedabad in their colourful dresses. The generous monsoon was a thing of the past. The lake was dwindling. The so-called progress had deprived Bhopal of all its beauty.

Pandit Nehru’s “miniature Kashmir” was now a crowded, ugly city. I was there when the Union Carbide Tragedy took place adding to the misery of Bhopal and Bhopalis.

I believe some outsiders want to change the name of Bhopal to Bhojpal. The Begums of Bhopal are still remembered and admired but even history does not remember Raja Bhoj. We knew his name because of the proverb “Kahan Raja Bhoj, aur kahan Gangu Teli”. If Bhopal is to be called Bhojpal we should call Delhi Hastinapur.  After destroying Bhopal’s natural beauty people wish to distort its history as well.

Raheela Masood is an 80-year-old retired teacher of literature and Greek and Roman classics, now at Karachi, Pakistan. She has received a lifetime award for being a great teacher to among others late Pakistan Prime Minister Benazir Bhutto. Her greatest desire is to visit Bhopal once more just to say goodbye. She is trying her best to get a visa and spend a few days with friends and relatives.
Published thanks to hard work of indiansinpakistan.
By Bhopale - July 10, 2011 No comments:
Email ThisBlogThis!Share to TwitterShare to FacebookShare to Pinterest
Labels: Borrowed Articles
Location: Bhopal, Madhya Pradesh, India
Newer Posts Older Posts Home
Subscribe to: Posts (Atom)