Suresh Nandmehar's tiny shoe repair shop at a footpath here is crowded every evening. As you approach it, you can hear words like social empowerment, caste atrocities and political opportunism. That's because Suresh is no ordinary cobbler - he is the founder, editor and publisher of a monthly newspaper.Baal Ki Khaal, a four-page tabloid, was born out of a struggle against official highhandedness. 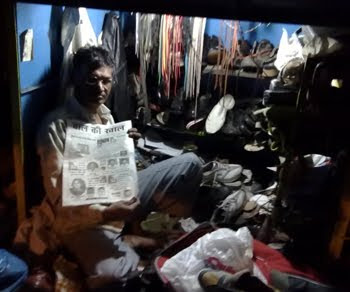 "In 1997, we sat on a 27-day long 'dharna' as we were being removed from the footpath, but the government was not giving us any other alternate site. Even after the agitation, government did not listen to us," Suresh told IANS.

Numerous stalls at the posh Professor's Colony here were shifted out of the main road.

"However, the irony was the role of the local media which did not given us coverage. At that time, I wished we had a newspaper that could make our voices heard," he recalls.

Suresh, 48, is no stranger to struggle. Belonging to a socially marginalised Scheduled Caste community, he had to drop out of Class 10 due to his family's poor financial condition.

"Because of lack of qualifications, I could not join a newspaper organisation like I wanted. But for over four years, I learnt about the profession from local reporters and others," he said.

"Finally in October 2003, my newspaper's first edition was published. Now, it is eight years and not a single issue has been delayed," a proud Suresh said.

He has four children, two sons and two daughters - all studying in high schools and colleges.

"I have faced a lot of hardships. We never celebrated festivals and we do not have enough money for it. Sometimes, I could not pay the school fees of my children, but I did not let the paper's publishing be halted as I have a commitment to my readers," he said.

The editor cobbler spends the entire day scouting for news, and sits in his shop in the evening from 5 p.m. till about midnight.

His hard work is bearing fruit.

Baal Ki Khaal has 7,300 subscribers, while 10,000 copies are published every month. It costs Suresh Rs.8,000 to keep his paper running. Each copy sells for Rs.2. It also generates a modest sum from advertisements.

The most interesting part is the content. The paper has no place for murder, crime or sensationalist stories. The main focus is on Dalit issues and their social empowerment. Suresh also writes the editor's column, where he touches upon these issues.

He is also helped by city-based writer Tikaram Ganotte and five others, who contribute to the paper for free.

"My brother-in-law sits in the shop till the evening. But I do not let my children to do this work," he said.

Soni Kumar, 30, who works as an executive at a private firm, is one of the paper's many readers.

"I read it every month and really find it amazing how a cobbler comes up with such writing. What is praiseworthy is that he is trying hard to educate and empower society," Kumar said.

Suresh proudly says his paper reaches everyone, from the common man to bureaucrats.

Madhya Pradesh government's Joint Director of Public Relations Department Dhruv Shukla told IANS: "Three years ago, I had come across this man. After knowing his background and his efforts, I had suggested to him to speak for Dalits so that it leaves an impact on readers."

A content Suresh said, "I think I have not compromised with the motive with which I had begun this paper. And I am satisfied that it could spread awareness among my people."
By Bhopale - March 30, 2011 1 comment:
Email ThisBlogThis!Share to TwitterShare to FacebookShare to Pinterest
Labels: Person

BHOJPAL is ruled out! I am all for BHOPAL and I have my reasons for it. Till today, I have not been convinced by anyone about the time-period in history about the existence of Raja Bhoj, his supposed sushasan (Good governance); his appearance (the gym-built disproportionate body, six-pack abs included as we see today in the statue that rests on the upper lake!) and the justifiable historical relevance, as in the case of Mumbai, Pune, Bengaluru, Chennai and Pudducherri, of reverting to the original name.

I have been observing the ongoing debate of Bhopal vs. Bhojpal practically every day ever since the announcement regarding the same has been made. I chose to maintain a dignified silence over the entire issue except for making my feelings known to my friends in person and on the facebook till....I saw the status update of an elected Member of the Legislative Assembly on his facebook home page. Stunned, I sat!! 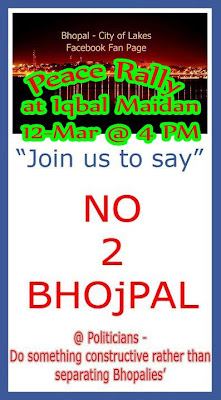 Following is the exact copy-paste (original spelling, punctuation, typographical errors and those of grammar included!) of the statement that I saw:

Frieds the name Bhopal has got no meaning in fact its a distorted verson of bhoo-pal. So if the BJP is trying to give some meaning to the name what is the harm in it...why such an hue and cry....people should take it in a sporting manner and in a stride....The name bhopal does not indicate any religion so the name bhojpal..so every body jai bhoj pal...

It, apparently, conveys the meaning that because Bhopal does not indicate any religion, so the name Bhojpal must be given and hence everyone must hail Bhojpal! What does it convey? From whatever little I can understand, I can easily infer that the renaming of my city, our city, is an attempt to give it a religion! I see it as an attempt to baptize my city at the sweet whims and fancies of a few. Is it an attempt to divide the various religions that exist peacefully, in full harmony with each other in my city? It is going to be a unique case in the entire World history where an attempt is being made to give a religion to a city. And the elected representative of the ruling party is blatantly accepting it on a social networking website! Interesting!! Doesn’t it sound of a communal touch?

I am a bona fide Hindu and I see no problems identifying myself with Bhopal but I cannot recognise myself with the proposed name. The entire exercise is an effort in futility and sans solid logic. There is no solid reason for the case. That some Raja Bhoj existed, is a fact. If we go by what the historians have to say, more than one king by the name Bhoj apparently existed in various periods of time. Which Raja Bhoj are we talking about? Is there a valid historical reference about Bhopal before the advent of Dost Mohammed Khan on the scene? Did a city, by any manuscript or scripture or any portion of validated history, by the name of Bhojpal ever exist?

Is there evidence that, at any point of time, any of the erstwhile rulers of Bhopal state changed the name of the city from Bhojpal to Bhopal? Should the name of a city need to have a religious meaning? And finally, merely by changing the name of the city, the Government can replicate the good governance model of Raja Bhoj? If I can be convinced about the questions, I have risen with fitting logical replies; I will accept the change to Bhojpal – even though it stands grammatically incorrect! Bhojpalya – it should be!!

The Times of India reported on 18th December 2006 that Jabalpur is being renamed Jabalipuram, and that the MP government is "mulling renaming Bhopal to Bhojpal and Indore to Indur."

Going according to the speed expected of the Government of India a good 4 years hence, the government found an opportunity on 28th February 2011, when the announcement came at an event to mark 1,000 years of the Parmar king who was famous for his sense of justice, scholarship and patronage for education, science, literature and the arts.
Flanking Chauhan was BJP national president Nitin Gadkari and vice-president Venkaiah Naidu. Actor Kabir Bedi anchored the programme while singer Sukhvinder Singh and percussionist Sivamani tuned the decked-out city to the millennium moment. Bhopal had a good time, with the laser shows, Sukhvinder's singing and Shiva Mani's drums, cleaning up of major squares and roads and of course - traffic jams. The Upper lake - Bada talab - was to be called the Bhojtal from now on.

But not everyone has taken to the name change.In a letter to Union home minister P. Chidambaram, the Opposition Congress said a change of name would affect the composite culture Bhopal has been known for.Congress spokespersons Atul Sharma and Arif Masood both questioned the move. “For over 200 years, Bhopal has been a symbol of Ganga-Jamuni (mixed) culture. This is an attempt to disturb communal harmony,” Masood, a member of the All India Muslim Personal Law Board, said.

“The town,” he added, “was founded by Afghan chieftain Dost Mohammad Khan in the 18th century. Besides, what’s the use of changing names? People want fresh drinking water, electricity and good roads.” Chief minister Chauhan brushed aside such criticism. “Where is the communal agenda in this? If the name of Bangalore could be changed to Bengaluru, Bombay to Mumbai and Calcutta to Kolkata,” he said, “why can we not change Bhopal to Bhojpal?”

Fellow party man and Bhopal legislator Vishwas Sarang, who first initiated the move to rename the city, said: “The legendary Raja Bhoj, therefore, must get his due with the state capital renamed Bhojpal.” But even if the city does get a new name, it won’t be in a hurry.The process of renaming cities is lengthy and complex. After a state writes to the Centre, the Union home ministry makes an assessment, taking into account historical facts, feelings of elected representatives, non-government organisations, and the implications on communal and social amity. 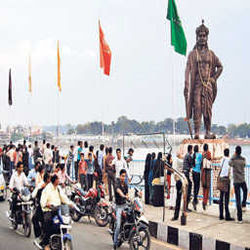 If the ministry approves of the proposal, it then writes to, among others, the railways, the postal department and the Geological Survey of India for inclusion of the new name on maps and other survey records.

Earlier, Chauhan unveiled a huge statue of Raja Bhoj in one corner of the city’s famous Badatalab lake. The statue was installed on a structure that once formed a part of the outer wall of the old city of Bhopal.

The irony is this fort and the outer wall was built by Dost Mohammad Khan, on which the staue of Raja Bhoj now stands.