Shikar (n. hunting; game; v.i. & t. hunt (animal) as sport. shikaree, shakari, shakary, n. (big game) hunter.) in Bhopal was not a sport nor a pastime but a way of life. Endowed with every form of wildlife in its lush jungles stretching across several rivers, Bhopal had an abundant supply of wild animals ranging fare of crocodiles, sambar, nilgai and all varieties of deer that inhabited the thick forests. Bhopal also possessed savannah-type land where wild bucks, chinkaras (small buck), grouse, partridge and wild geese were found in abundance. It was thus a well-known haven for all kinds of hunters. Over the centuries, shikar had for Bhopal’s nobility developed into a highly skilled pursuit. At the top, was the royal family for whom the hunting of tigers was a traditional pursuit. Every scion of the family needed to prove his manhood by hunting big game and even the Begums – notably Sikandar Begum – went tiger hunting. In Bhopal, the tiger hunt was reserved for the royal family; the gentry were allowed to shoot less regal game.

Nawab Nasrullah Khan was an expert hunter and was one of the few hunters in India who had achieved the distinction of becoming ‘nausherwan’ – a hunter who bags nine tigers in a 24-hours span. Nawab Hamidullah tried to emulate his elder brother’s record but only managed eight tigers in 24 hours, allowing his daughter, Abida Sultan, to bag the ninth after the 24-hour gong had sounded. Once Princess Abida was driving Sultan Jahan Begum from Bhopal to Chiklod when they suddenly came across a tiger walking on the road. Princess Abida was stopped from shooting the tiger by their family doctor who was accompanying them, as Begum Sultan Jahan was with them and it was too dangerous. On reaching Chiklod, Sultan Jahan said aloud to her son Hamidullah, “Mian today, your daughter ducked the challenge of shooting a tiger. She will have to pay the usual penalty of sacrificing a bakra (goat) to make for her lack of courage. We don’t expect this kind of cowardice from our family members”! The seventy-year old matriarch who was not herself a shikari, expected mere fourteen-year old girl to shoot a tiger when there was no one else in the car remotely familiar with shikar. Such were the expectations of the family matriarchs, even from the girls of the family.

Edward, Prince of Wales (later to become King Edward VIII and then Duke of Windsor) visited Bhopal from 2nd till 5th February 1922. The Prince went to Kachnaria to shoot big game, particularly tigers for which Bhopal was famous. Gandhi was waging his anti-British struggle and had called on the Indian people to boycott the Prince of Wales visit. Gandhi’s influence had not penetrated in to the princely states. However, the carefully planned tiger shoots suffered a rude shock when the chief guest failed to even sight a tiger, while some of his staff (like Dickie Mountbatten) shot more than one each. The famous shikari, Nawab Nasrullah Khan, explained away his embarrassment by insisting that it was the spell cast by Mr Gandhi that had led to the disappearance of all the tigers! Since his appeal to boycott the Prince’s visit had been ignored by the people of Bhopal, Mr Gandhi had made the tigers to comply! But the most extraordinary event followed soon, Prince went missing for more than twelve hours from his tent that night.

Nawab Nasrullah along with his trusted shikari Najibullah Khan were guarding the tent during night, when mysteriously the Prince disappeared. At breakfast, there was still no sign of the Prince, investigations indicating that the Prince must have been kidnapped soon after dinner. Nawab Nasrullah, choking with shame and desperation, sat cursing the ‘old villain’ Gandhi, while Najibullah Khan threatened to commit suicide!

However, the Prince soon returned to his tent, safe and sound. It transpired that, unhappy at being the only member of his party who failed even to sight a tiger, the Prince decided that his hosts had been overcautious for his safety and had deliberately avoided taking him where his life might have been exposed to danger by encountering a tiger. He had, therefore, decided to make his own solo attempt and slipped out of camp unnoticed. The Prince then having lost his bearings in the dark, roamed around in the jungles eagerly looking forward to bagging his tiger on foot, alas without success! Only after daybreak, was the Prince able to find his way back to camp. The Prince returned to Bhopal and was given a royal send-off. In order to maintain Bhopal’s honor as a tiger shooting paradise, it was announced in the press that the Prince had bagged three tigers (report in the London Times of 7th February 1922).

Many magnificent shikargahs of Bhopal have been lost for ever, while some have been converted to reserve forests, continuing the legend of Bhopal big games. The shooting of course, has long acquired the happily changed meaning, with the cameras replacing the guns. Another legacy that continues from the glory days of Bhopal shikar is the open military jeeps that were extensively used for shikar during the nawab era. Nawab Hamidullah had ordered twenty-six jeeps to Ford, London. These were transported to Bombay by ship. After being driven by road to Bhopal, they were modified by the Bhopali mechanics to suit the India conditions, giving birth to the tradition of Bhopali modified open military jeeps. The jeeps are still a rage among many Bombay film stars, Indian politicians and the Bhopalis. These modified jeeps can still be seen on Bhopal roads, by the side of the latest luxury cars and winning the race of turning heads hands down.
By Bhopale - September 13, 2007 4 comments:
Email ThisBlogThis!Share to TwitterShare to FacebookShare to Pinterest
Labels: Culture, History

Reliance Fresh In Bhopal – The Aftermath 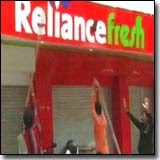 Not withstanding the early protests, Reliance Fresh outlets have opened at different locations of Bhopal. The protests continue from the vegetable sellers of Bhopal. The retailer and bulk traders of vegetables were on strike on Saturday September 6th 2007 to protest against the opening of Reliance Fresh. To the surprise of Bhopalis, the vegetable prices were reduced by almost half when the markets reopened on Monday. Inspite of the reduction of price and closer for a day, the sale was reported to have about halved by the workers of Madhya Pradesh Phal Sabji Vikreta Mahasangh (fruit and vegetable seller union).

Now the Bhopalis are asking if the vegetable prices can be reduced by half, and the farmers who grow the vegetables are always in such a poor financial state, where was the money going for all these years? The union formed by fruit and vegetable sellers of Madhya Pradesh are hoping that the state government would step in the way the Uttar Pradesh government has and save the day for them. However, with the powerful minister of Madhya Pradesh Mr. Babulal Gaur has been unflinching in his support towards the Reliance Fresh stores, making the closer of these Reliance Fresh stores very unlikely. Meanwhile the Bhopali is queuing up at the Reliance Fresh while keeping an eye at the market price, enjoying the best of both the worlds.
By Bhopale - September 06, 2007 No comments:
Email ThisBlogThis!Share to TwitterShare to FacebookShare to Pinterest
Labels: Contemporary

Sultan Jahan made quick preparations for her journey to England and boarded the SS Kaiser-e-Hind in September 1925, accompanied by her son, her three granddaughters, her nephews (Obaidullah Khan’s sons), the usual retinue of ministers, relatives, household staff and the inevitable jars of pickles and spices.

Throughout England’s bleak winter of 1925-26, the Begum fought a battle that was almost lost, but her tenacity, her passion and her pleading left all her interlocutors if not impressed, deeply moved by her arguments. Young Hamidullah also helped his cause by cutting the figure of the loyal Begum and her ‘educated’ debonair, sporting son who had received a decoration for his effort in the war, rubbing out some of the imagery of an anti-British pro-Turkish rebel. Long after the allure of England’s social round had faded and the Begum’s stock of spices and pickles depleted, the Begum stuck it out, in pursuit of the only aim left in her life. The Begum made her rounds of calls on British royalty, presenting to the young Duke of York (later King George VI) and the Duchess a ceremonial offering of chatti, a traditional Muslim ceremony, in which, on the sixth day after the birth of an heir, family members carry gifts to the parents household, on the birth of their daughter Elizabeth (later Queen Elizabeth II).

King George V and Queen Mary received the loyal Begum at Buckingham palace. Sultan Jahan launched herself into a tirade of bathos, loyalty and pleading for justice. King George was sympathetic, but explained the he was only a constitutional monarch. Sultan Jahan refused to accept, responding the British monarchy had always sustained the women rulers of Bhopal. She reminded His Majesty that women’s rule in Bhopal had only been possible because of Queen Victoria’s support. She had been like a mother to the Begums and her grandson could not turn away Queen Victoria’s ‘daughter’. With this emotional and heart-rending appeal, Sultan Jahan burst into tears and fainted! This led to consternation in the King’s chamber and Queen Mary appeared, calling for smelling salts and water to help the Begum recover composure. Undoubtedly, the scene was embarrassing, but it also created a deep feeling of sympathy for the loyal, venerable and dignified Begum.

The wave started to turn against Habibullah and in favor of Hamidullah. Sir Arthur Hertzel, Under Secretary to the Secretary of State for India in London, questioned the basis on which Delhi’s legal foundations had been built in favor of Habibullah. Hertzel’s letter was immediately followed up by Lord Birkenhead’s telegram to the Viceroy, calling for a re-examination of the case. Reading was forced to send the case back, a fourth time, to his advisors for further scrutiny. Hertzel had commented regarding practices in Muslim states in pre-Mutiny days, which were glossed over previously. These were brought out and practices in all Muslim states – ranging from Egypt to Iran – examined in great details. By December 1925, the India Office’s legal torpedoes from London had holed the Viceroy’s ship in Delhi. On 24th December, Reading overruled Thompson and reversed his earlier decision. After London agreeing to the withdrawal of the 21st May memorandum, the Viceroy’s Council signed a second memorandum supporting Hamidullah’s claim on 14th January 1926. Rarely if ever had the British government in India reversed itself on a decision of such importance. Within seven months of the first memorandum (21 May), the Viceroy proffered legal arguments justifying a 180-degree turn in the second memorandum (14 January).
By Bhopale - September 03, 2007 No comments:
Email ThisBlogThis!Share to TwitterShare to FacebookShare to Pinterest
Labels: History
Newer Posts Older Posts Home
Subscribe to: Posts (Atom)