The Unlaked Lake Of Bhopal

The temple of Bhojpur is situated at about 21 KMs from Bhopal. This temple has many myths associated with it, claiming that the temple was constructed by Pandavas during

their exile, or here Kunti left Karna near the banks of Betwa (Betrawati) River. The present temple was most probably started by Raja Bhoj , the Paramara ruler who ruled from 1010-1055 AD. The temple, known as the 'Somnath of the North', was conceived on a grand scale. Standing on an immense platform, 32 meters long, 24 meters across and 5 meters high, its great entrance doorway, of richly carved stone, is 10 m high and 5 m wide. A huge Shiva linga is placed on a massive stepped stone pedestal. It appears that a much bigger complex than currently exists was planned. Building and layout plans etched on rocks and stone slabs close to the temple suggest that many more temples were proposed to be built. However, the plans could not be carried out, and was abandoned midway. Had the plans been executed, Bhojpur would have been one of the biggest temple complexes in the country. The temple is unique in being well preserved despite having been abandoned in the course of construction. Moldings and stone-blocks lie in adjacent quarries and an earthen ramp for raising stones survives. Numerous line drawings of architectural parts are engraved on the quarry’s rock surfaces.

A roof made of fiber glass, has been recently added to the temple by the Archeological Society Of India (ASI) along with a missing column. The temple walls have been cleaned of dirt accumulated over the centuries. After a nationwide hunt, the ASI managed to locate similar stone in an area near Agra and master masons and sculptors were commissioned to carve them  in a style matching the original. A 12-tonne pillar, carved out of a single stone, was put in place a few months ago. "It took us more than six months to devise the intricate system of pulleys and levers required to put the pillar in its slot because a crane with a boom long enough to put the pillar in its proper place was simply not available in the country," said K.K. Muhammad, superintending archaeologist of the MP circle of the Archaeological Survey of India (ASI) . The temple boasts of two other pillars weighing 33 tons each, carved out of a single block of stone. "How fascinating it would be to know how ancient builders erected those pillars when, with all the technology and resources we have at our command nowadays, it took us six months to install a pillar of almost one-third the weight," marvels Muhammad.

No account of Bhojpur can be completed without a description of Bhoja's lake and dams. The Bhopal lake, known as the Upper Lake or “Bada taal” is ascribed to Raja Bhoj, the Paramara ruler who ruled from 1010-1055 AD. The lake created must indeed have been vast. The upper lake, itself considered to be one of the biggest, is a diminished form of the water body created by the king. The history of lake is very interesting. Historian and archaeologist William Kincaid, who surveyed the lake and published a paper in the year 1888, quotes the legend that Bhoja was stricken with a severe illness which the court physicians failed to cure. A holy recluse prophesied that the king would die of the disease, unless he was able to construct a lake

so great as to be the largest in India, and fed by 365 streams. Skilled engineers were then sent along the valleys of the Vindhya range to explore the region and report upon the feasibility of such a lake being constructed. A valley was ultimately discovered and subsequently enclosed, which included the headwaters of the river Betwa. The engineers found, much to their disappointment, that only 356 springs and streams fed the waters flowing through the valley. The difficulty was eventually overcome by Kalia, a Gond chief, who pointed out a missing river which, with its tributaries, made up the requisite number and was accordingly named Kaliasot or Kalia’s river, a name it carries to this day.

According to Kincaid, this legend preserves two important facts: That the drainage area of the sources of Betwa was insufficient to fill the lake; and that the lake thus formed was of an unusual size. A study of the local topography and the remains of the civil works, in Kincaid’s analysis, clearly prove that the engineers of those days skillfully turned the waters of another river, which rises 32 km to the west, into the Betwa valley. This was accomplished by creating a magnificent, cyclopean dam in Bhopal. This is what remains today, known in Bhopal as the Bada Taalab or the upper lake. The Chota Talab or the lower lake was created much later by Chotte Khan from the overflowing water of Upper Lake.

Bhojpur appears to have been used as a summer residence rather than as a regular urban settlement like Dhar, built on a grid of crossroads, intersected by the king's highway. The Gond tales of Bhoj's boathouse, identified with two upright and one horizontal stone, from which he would sail out daily to Bhimbetka caves (mentioned by Kincaid as Bhimbet hills and Buddhist caves visited by Raja Bhoj everyday and return to capital for his midday meals) , of the mighty fort of Gonar, lake cities and spirits of the deep that interfered with the temple construction suggest a similar presumption. The remains of three cyclopean dams, built successively on river Betwa near the Bhojpur temple, on Kaliasot near village Mendua, and in Bhopal below Kamla Park,  can still be seen. The present day town of Mandideep was at that time an island or Dvipa, surrounded by this vast lake. The Siva temple stood on the bank of this man-made lake which existed for four hundred years. The breached dams can still be seen at various places. The 98 feet high dam over Betwa lies immediately to the north of the temple; its thickness is over 300 feet at the base, gradually reducing to a thickness of about 164 feet at the top. The core of this immense dam was of earth, faced on either side with stone slabs to an average thickness of 30 feet. The semi-dressed stone is from the same local quarries as the temple itself, and the measurements of the slabs are about the same as those of the ramp.

From the storage lake, a river flowed at a right angle to its former course around the hills and into the Betwa valley; it became a valuable feeder. The Kaliasot river carried its surplus waters into the larger lake for three full months after the rainy season had ended. Kincaid ran a line of levels from the waste weir discovered by him to the Bhopal railway levels. When plotted on the Bhopal-Malwa topographical survey maps, it was found that the ancient lake covered 65,000 hectares (ha). It must have then formed the largest artificial lake in the Indian peninsula — one unbroken sheet of water with islands adding to its beauty. It was, in places, more than 30 meters (m) deep, and was surrounded by high hills on all sides.

The waste weir cuts through the solid rock of one of the lower hills. It is situated at the apex of a triangular valley, and is probably 3 km from the great dam in a direct line. Its position, so far from the dam, according to Kincaid, provides further proof of the practical ability of the engineers of the time. Any error in levels would have quickly destroyed the dam which, though stone-faced on both sides, was filled in by earth and could not have withstood heavy overflows for long. 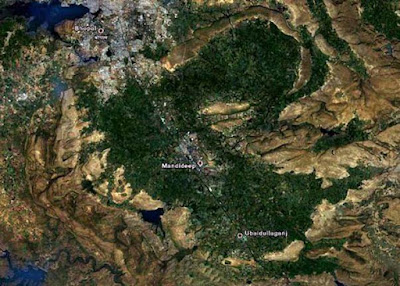 The destruction of this lake, sometime in 1434 AD by Hoshang Shah (1405-1435 AD), is described by contemporary historian Sahib Hakim in Ma’asir-e-Mahmud Shahi. While it took the army of Hoshang Shah  three months to destroy the dam, three years elapsed before the bed was empty and thirty before it became cultivable. One can clearly see the evidence of destruction of the embankment at a place called Mendua, not very far from the Siva temple at Bhojpur. The dam across the Betwa was also destroyed by the armies of Hoshang Shah. The embankment at Bhopal is still preserved and so is the lake in it’s present constricted size. It is said, following the destruction of the embankment and drying up of the lake, the climate of Malwa underwent a change, and the town of Vidisha became more prone to floods.

After 1000 years of Raja Bhoj water riots are breaking out in the areas where this great water body once existed. Mandideep, the island, is now an industrial area which

faces acute water crisis. The feeding streams to the existing part of the Bhopal lakes have been encroached resulting in the lakes drying up in the summers. The city is now pinning its hopes on the Narmada Water supply project, already behind schedule, with a new deadline of March 2010. Covering a distance of about 60 km, the Narmada Water is being brought to Bhopal from Narmada River at Shahganj, considered the lifeline of Madhya Pradesh and laying of pipeline and other works for the purpose are underway.