The current episode of media frenzy over is waning now. Today the Cabinet will discuss Group of Minister’s (GoM) report on , which is likely to be approved with some superficial change here and there. The Communist parties are done giving their usual sound bytes,  the gas victim activists have played their part.

The known steps of an old dance has been performed again, with expectations of repeat performances in near future.

The GoM, formed to divert attention of nation from the recent Bhopal verdict, to protect the Nuclear Liability Bill , offering Rs. 300 crore liability for nuclear plants (recent Indian broadband wireless auctions earned the government more than 38,000 crores) and stop talking about Bhopal during the visit of US president Obama to India. The media, and in turn the people in general, were fed with rumors about extradition of and many other claims. tweets of just one person is more fruitful then waiting for 26 years (and counting) for the Indian government to find out the truth.

From $500 “enough for an Indian”, to Rs 10 Lakh/death; from not finding Rs 983 crores since 2008 to finding the money in 983 seconds and releasing it a few hours before the first meeting of GoM (link), Indian Rupees, with a new symbol, is the be all and end all solution for every problem.

Meanwhile, the city of has become as synonymous with gas as football is with .  ’s economy has stalled, in spite of industrial success. Proposals (1, 2)  for moving beyond the gas is floated time to time, all eventually going up in gas.
tourism has lately developed the added attraction of the gas tragedy site to it's portfolio. The government has identified the opportunity and proposes to add the Bhopal Union Carbide site as a tourist attraction. Interestingly, one minister has stated earlier that the groundwater in the factory area is now potable and the chemicals will be washed away by rain, while even today the agencies are at dark over how to clean the site.

Even the activists for Bhopal Gas Victims, are a divided lot. In place of complementing each other, there appears to be little or no coordination between the agencies (check this). Inspite of the considerable mind share and awareness about Bhopal incidence in the world and funds from donations, book royalty (Animal’s People, Five Past Midnight At Bhopal), the actual victims of Bhopal continue to suffer and die.

The dance performance started more than 25 years ago continues.
By Bhopale - June 24, 2010 2 comments:
Email ThisBlogThis!Share to TwitterShare to FacebookShare to Pinterest
Labels: Gas

The star studded movie Rajneeti has a bigger star for Bhopalis, the city of Bhopal.

The movie is almost entirely shot in Bhopal and the people who enthusiastically woke up at 6 AM to participate in the crowd scenes during the shooting of the movie, crowded the movie halls with Dhols and created traffic jams in the city. 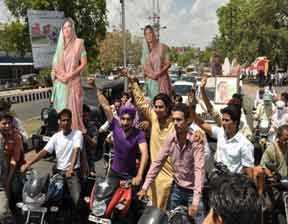 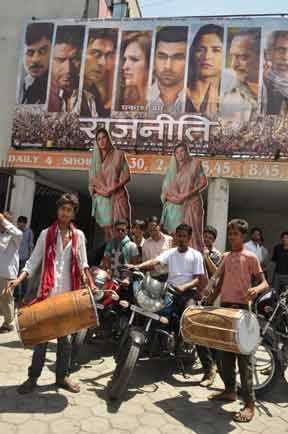 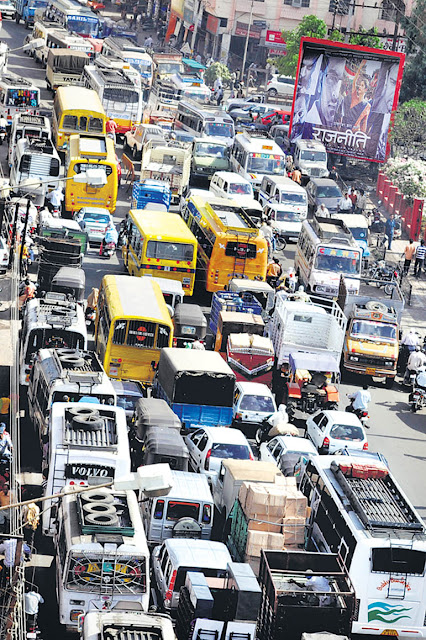 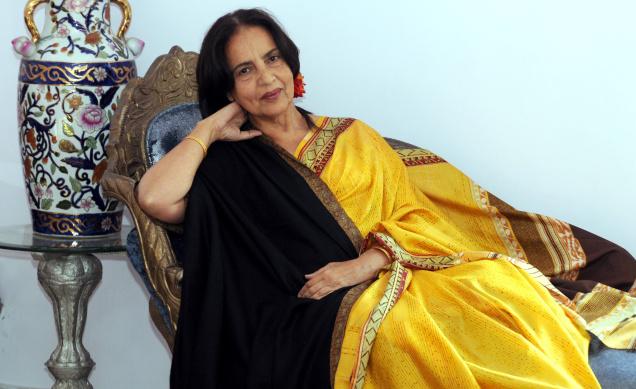 “I belong to a city where women ruled for 100 years. So much is the pride in that place that till date most women don't attach their father or husband's surname . Most girls still use ‘Sultan,' just like I do.”

Personifying pride coupled with grace and humility – meet Salma Sultan, the woman who ruled the small screen as a newsreader for over two-and-a-half decades. A rose became synonymous with her and news reading — an elegant exercise.

Today Salma , over 63 years of age, hasn't lost her charm and poise. Looking at her on television , no one would have imagined that she possessed such a tremendous sense of humour. Barely a sentence of hers is free of effortless wit and hilarity.

A Delhiite for over two decades, Salma now lives in her palatial three-storey bungalow at Jangpura and has to her credit the greenery of the area starting from Sahi Hospital to its back and beyond. An ardent nature lover, she has turned the ugly , illegal parking area to a lush meadow. “Delhi is my karmbhoomi. It has shaped my confidence and given me immense strength to fight contradictory situations.”

As one enters her drawing room through the Rajasthani fort style gate, peace greets through a painting of the Buddha and class via an original M. F Husain painting . “Husain saab gifted it to my father,” that familiar voice falls on the ears as one spots the beautiful woman with her dimpled smile and motherly warmth in her kohl-less eyes. She has “taken great pains” to get ready – a yellow and brown sari, “touch-ups with talcum powder and lipstick”, and stuck a red rose on insistence for the photo shoot. “I don't like getting ready and ‘pose' for pictures,” she says politely. She is shy and camera conscious despite, ironically, being in front of the camera from 1967 till the late nineties.

But Salma , quite contrary to her appearance on the small screen, had been a naughty child. “I was very assertive, irrepressible, naughty but not spoiled. Not a single day of my life would go without a prank in school.” For instance, the day “our teacher would ask us to bring the geography book, I would make it a point to give it to someone to get the ‘punishment' of standing outside the classroom with three others equally party to this plan,” she laughs as her dimple grows deep.

Born to scholar and secretary in the Ministry of Agriculture Mohammed Asghar Ansari and a “Moghul” homemaker mother, Salma was her parents' second child. “I was an unplanned child but a blessing to my lonely sister (Maimoona Sultan, four-time Member of Parliament) who would protect me from the wrath of my disciplined father who would make sure that I offer all my prayers (namaz) and read the Quran on time. But he has a great contribution in the making of my personality. He used to emphasise education and extra curricular activities in school. He would prepare my debate and make me rehearse in front of him,” recalls Salma about her Sultanpur school days in Bhopal. Salma did her graduation from Bhopal. “I did my post graduation in English from Indraprastha College, and simultaneously gave audition for an announcer on Doordarshan.”

On to news reading

Salma became a newsreader by fluke. “Those days”, she recalls “only Pratima and Gopal Kaul used tor read news. Kaul wanted to become a producer, so his tussle with the DD was a regular affair. Once, as a protest and to make sure not to read news anymore, he shaved his head. As he entered the studio, the producer was shocked.” In the frantic search to replace him, Salma became a casualty. “But there was a hidden desire to read news as it was a well-paid, comfortable job where the newsreader, unlike an announcer like me, had to come at 4 p.m., read the news a couple of times and go back.” A nervous Salma read the 15 minutes news in eight minutes and “paused”. “The hapless producer decided to train me and that's how the journey began.”

She narrates the story behind the signature rose in her hair. “I once wore a pink rose to match my pink sari and read news. Telephone calls and letters of appreciation poured in. Then the day I wouldn't tuck a rose, letters of complaints and requests would follow. So, a rose became a regular affair.” And to hunt for matching roses, Salma would either grow her own or “steal from the neighbourhood.”

After her retirement , Salma moved to direction. Her serials Panchtantra, Suno Kahani, Swar Mere Tumhare and Jalte Sawa drew attention. She recalls, “To shoot Panchtantra on minimum budget, I went to Mumbai to look for a set of rajmahal. Someone told me that B.R. Chopra's set for Mahabharata was being dismantled after the shooting. I met him and he was kind enough to let me use his set. Panchantra used to be telecast soon after Mahabharata and did very well. I will never forget his compliment , “Mujhe is ladki ki daad deni padegi. Mahabharat ke baad bhi log isse dekhte hain”.”

The mother of an Income Tax Commissioner Saad and a choreographer daughter Sana and two grandchildren, Salma's quest for learning hasn't waned. “I am learning synthesiser and , harmonium for my love of music, and computers to be tech-savy.” Salma also does interior designing. She began by doing up her 13-room bungalow in Bhopal followed by an apartment in Patparganj. Her residence is proof of her refined taste.

How does she keep fit? “I do yoga, walk and take supplements. I treat my body as a gift from God…. To purify my inner self, I offer namaz regularly,” she signs off, poise refuses to fade.