A right to information campaigner who had raised questions on several tiger deaths across Madhya Pradesh was shot dead as she got into her car moments after stepping out of home this morning. 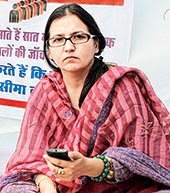 Police said the 35-year-old was shot by an unidentified assailant as she sat in her Santro in the Koh-e-Fiza locality of the Madhya Pradesh capital.

“Shahla Masood was shot dead around 11am when she was sitting in her car,” senior superintendent of police Adarsh Katiyar said.

The SSP said a massive hunt had been launched to nab the assailant though the motive behind the murder wasn’t clear yet.

Ajay Dubey, a close associate of the slain RTI campaigner, said Shahla had “raised questions regarding several tiger deaths” across the state. “People involved in the racket may be responsible,” he added.

A former model, event manager and later a full-time RTI activist, Shahla was feared by many politicians and bureaucrats.

Dubey demanded a CBI probe into the murder. “We have no faith in the state government, so the matter should be investigated by the CBI.”

The killing of Shahla has again raised questions on the ability of governments to protect whistleblowers or rights activists.

“The fact that a lady can be murdered like this in broad daylight outside her own house shows that there is no security worth its name in Bhopal,” leader of Opposition in the Madhya Pradesh Assembly Ajay Singh told PTI.

“I am sure…we will solve the murder soon,” PTI quoted IG Shailendra Shrivastava as saying.

Shahla’s body has been sent for post-mortem. Police have seized the car and locked her room.

Sources said the Bhopal-based activist had stayed up the whole of last night and watched the dramatic scenes of Hazare’s arrest this morning.

Her last status update on Facebook read “Gandhi: ‘the purpose of civil resistance is provocation.’ Anna has succeeded in provoking the government and the opposition. Hope he wins us freedom from corruption. Meet at 2pm Boat Club Bhopal.”

A PTI report said Shahla’s aunt Rubab Zaidi came down to see why her niece hadn’t driven off even 15 minutes after stepping out of home. When she reached the car, Zaidi saw Shahla slumped inside. She then called Shahla’s father.

The activist was single and her only sister lives in America.
http://goo.gl/pt3Ok
By Bhopale - August 17, 2011 3 comments:
Email ThisBlogThis!Share to TwitterShare to FacebookShare to Pinterest
Labels: Bhopal, India, Person
Location: Madhya Pradesh, India

Nasir Kamal, the best pen available on Bhopal's unique culture and the best example of the old Bhopali 'tehzeeb' is no more. The senior journalist from Bhopal expired at Mumbai on Wednesday 3rd August 2011. He was suffering from fever during his visit to Mumbai.

Kamaal, 55, is survived by his wife and two sons. He had recently joined Times of India at Bhopal. Sources said that he was suffering from a fever for the last few days. Kamaal had worked for MP Chronicle, National Mail, Free Press Journal and The Hindustan Times. He was famous for his columns “Then and Now” and “Time Machine”. A thorough gentleman, Mr Nasir Kamal had lofty values ​​of the quality of journalism and journalistic writing. He lived like a monk. His journalistic career and dedication will continue to inspire new generations.

His last journey will start from Safia Masjid, Ahmedabad Palace at 1:30 PM today. He will be cremated at Bada Bag crematorium.

Many of his articles were published in this blog with his kind permission. Wanted to talk to him about guest blogging, but sadly that was not to happen. Bhopale expresses profound grief over Nasir Kamal’s death and hope that Almighty will give him a place in paradise since Kamal has died in the pious month of Ramazan.
By Bhopale - August 04, 2011 5 comments:
Email ThisBlogThis!Share to TwitterShare to FacebookShare to Pinterest
Labels: Bhopal, India, Nasir Kamal
Newer Posts Older Posts Home
Subscribe to: Posts (Atom)