The Age Of Kali

Then the monk took Mahendra into another chamber. There he saw a beautiful image of the Goddess as Bearer of the earth, perfectly formed and decorated with every ornament.
“Who is she?” asked Mahendra.

“The mother-as-she-was”, replied the monk
“Who is that?” said Mahendra.
“She who subdued the wild beasts such as the elephant and lion underfoot and set up her lotus throne in their dwelling place. She was happy and beautiful, adorned with every ornament, radiant as the risen sun and full of majesty. Prostrate yourself before her”.
After Mahendra had devoutly prostrated himself before the motherland in the form of nurturing Goddess, the monk pointed to a dark tunnel and said, “Follow me”. He went on ahead, Mahendra following apprehensively close behind.

They reached a dark chamber, in the depths of the earth, lit somehow by a faint light.
There in the dim light he could see the image of Kali.
The monk said, “Look, this is the mother-as-she-is”.
“Kali!” said Mahendra fearfully.
“Yes, Kali”, said the monk.

“Blackened and shrouded in darkness. She has been robbed of everything; that is why she is naked. And because the whole land is burning-ground, she is garlanded with skulls. And she is crushing her own Shiv (good) under foot! Alas dear Mother!”

www.feedburner.com/bhopal-e
By Bhopale - October 26, 2008 No comments:
Email ThisBlogThis!Share to TwitterShare to FacebookShare to Pinterest
Labels: Contemporary

For the Desk of:
His Excellency Wen Jiabao
The Premier's Office
Beijing
Capital of the Freedom-loving Nation of China

From the Desk of:
"The White Tiger"
A Thinking Man
And an Entrepreneur
Living in the world's center of Technology and Outsourcing
Electronics City Phase 1 (just off Hosur Main Road)
Bangalore, India
Visiting Bhopal - on business

Mr. Premier,
Sir,
Observing keenly the interest generated across the globe about my series of letters to you, I decided to bring to your notice another interesting perspective of the Indian Entrepreneur. Recently it has been observed in great details in the media - what has been categorized as death due to malnutrition or death due to viral fever in Madhya Pradesh - depending on the side of the fence you are in.
To help you understand, sir, the details is as follows:
The Madhya Pradesh government claims it has managed to drastically cut down malnutrition rates in the state through its 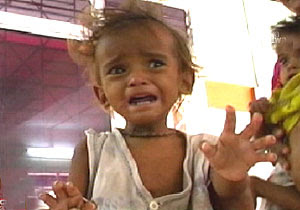 Bal Sanjivani campaign, but over the last four months, 361 severely malnourished children have reportedly died. In fact, pressure on Anganwadi workers have been so much that they have stopped registering malnourished children and many have even perished without a trace. Rajaram has spent two weeks at the government-run nutritional rehabilitation center in Khandwa, but bafflingly, he doesn't exist in the local Anganwadi records in his village. The much hyped Bal Sanjivani campaign was launched to identify malnourished children and monitor their growth. Instead, Anganwadi workers stopped registering severely malnourished children to meet targets. At Karwani village, where seven malnutrition deaths have been reported recently, the daily attendance register at the Anganwadi shows 100 per cent attendance of children below five, including two and a half year old Ramraj, who died of severe malnutrition on July 30. In fact, he ate a hot meal at the Anganwadi for a week even after his death. There is no record of two-year-old Aarti, who also died of malnutrition. So it isn't hard to understand how the Bal Sanjivani programme has come up with glowing results, even though the situation is so grim on the ground. In its report published in May 2008, severe malnutrition in the state has come down sharply from 5.5 per cent to 0.56 per cent, a drastic contrast to the 2007 National Family Health Survey, which reported more than double (12.6 per cent) are severely malnourished in Madhya Pradesh, the highest in the country. "Malnutrition was not the reason. They died because of viral fever," said Kailash Vijayvargiye, spokesperson, Madhya Pradesh (previous claim to fame). In its bid to spruce up its image quickly, the MP government's plan misfired. Setting targets to improve the health status of children below five has only resulted in more pressure on Anganwadi workers who have chosen to deny those who need them the most.
You might be wondering, sir, what has all this to do with a self made entrepreneur like me. I will come to that shortly. Before that I would bring to your notice an incidence from the recent past, i.e. about a year back.


The Income Tax Department officials in Madhya Pradesh seized millions in cash and unearthed similarly high-valued assets from premises of some health officials and their business associates here. Officials seized Rs.1.3 million in cash and property documents worth in millions from the premises of State Health Director Yogiraj Sharma. Residences of two other health officials were also searched. Besides Dr. Sharma's premises, raids were conducted at a dozen other places. Cash worth Rs.1.4 million, ownership documents of 200 acres of prime land and 12 bank lockers were seized. Materials worth Rs.4.5 million were seized from the storehouses of Metox Remedies, a company owned by Sachdeva, income tax officials said. In follow up action, in May 2008 Income tax sleuths on conducted simultaneous raids on Madhya Pradesh health minister Ajay Vishnoi's residence; his brother Abhay Vishnoi's office and a homeopathy and dental college run by the minister's wife Alka Vishnoi - all in Jabalpur. The raids were also conducted in residences and offices of Vishnoi's friends, business partners, builders and bureaucrats attached to the state health department in Jabalpur, Bhopal, Indore and Gwalior. In Bhopal, income tax officials raided residences of health secretary Ashoke Sharma, former health commissioner Rajesh Rajora and business house of a known builder and real-estate dealer. More than 15 places across the cities were raided. Sources in the I-T department said incriminating documents were recovered. The Income Tax department raided 55 properties across the cities of Jabalpur, Indore and Bhopal on 30th May 2008 and the aftermath is still unraveling. The extent of cut backs is as follows - 10 to 15% of the total amount sanctioned would go to the secretariat during the sanctioning of money to Chief Medical Officer. Next 15 to 20% would go to supplier, another 10% for other expenses. If remaining amount is unable to buy the medicines, the medicines are only bought on paper. The costs of medicines procured in Madhya Pradesh are costlier by 11% to 267% as compared to states like Kerala or Tamil Nadu.

Mr Yogiraj, mentioned above, was asked to go on compulsory retirement - no further action was taken against him.Ajay Vishnoi also resigned from his post.

That brings us to my visit to Bhopal. As you know, sir, I have a nose for business which has been so helpful in surviving. Bhopal has a booming realty market, with money pouring in and construction projects popping up every where. In this era of financial meltdown, the world thinks that it is only al_Qaida that has its money safely tucked away from banks. Well, we self made hard nosed Indian entrepreneurs know of another entity that have cash tucked away safely

For your ready reference, following is the partial list of Malls coming up in Bhopal:
You might have a fare guess at the source of money pouring in to a sleepy town like Bhopal, without any industrial development of note.

Mr. Premier, Sir, guessing is what most of the people are left with in Bhopal today

Online directions of happening locations this season (Click on ballons to see details). Warm wishes for the festive season