The Election Commission of India - has asked officials in other states to study the communication plan and vulnerability mapping exercise drawn up by the Madhya Pradesh electoral authorities for the assembly poll and replicate it in their states during the upcoming general elections, official sources said.

'Besides the methodology adopted by Madhya Pradesh's Chief Electoral Officer - in the vulnerability mapping exercise and identification of sensitive booths, the ECI has also asked all the other CEOs to implement the communication plan used on polling day in the Madhya Pradesh assembly elections in the Lok Sabha polls next year,' said an official on deputation in the CEO's office here.

The decision was taken after a presentation of the communication plan was made by the Madhya Pradesh CEO J.S. Mathur at the two-day conference of CEOs of all states in Delhi last week.

Under the communication plan, polling booths were equipped with cell phones, landline phones and wireless sets - to enable them to get in touch with senior officials command in case the scheduled polling process was hampered.

'The ECI personally verified the utility of the plan on polling day by randomly calling presiding officers at 15 polling booths to ensure that everything was going on smoothly.'

Besides the communication plan, the group SMS systems and group mailing systems also helped connect all the district collectors with the CEO's office. This helped in official decisions being conveyed immediately and reminders were sent through text messages.

The ECI has also asked all CEOs to follow Madhya Pradesh's techniques in the vulnerability mapping and identification of sensitive booths in the general elections.

The state had prepared a specific format to cull information for identification of sensitive booths and polling stations.

It was for the first time in Madhya Pradesh that information technology applications were used widely in the electoral process, enabling the field officers to make a quick decision which in turn led to a decline in number of violent incidents.

'We were able to monitor incidents on polling day as they were reported in time,' said Mathur, adding: 'It helped in taking action on complaints of malpractice during elections leading to a reduction in overall number of such incidents'.

Also, the number of polling booths that saw re-polling was reduced by more than half in the 2008 assembly polls. While repolling was held at 68 booths in 2003, in 2008 it was only needed in 31 booths.

-Nerve.In
By Bhopale - December 26, 2008 No comments:
Email ThisBlogThis!Share to TwitterShare to FacebookShare to Pinterest
Labels: Contemporary 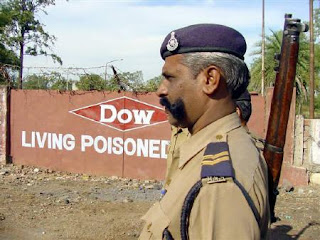 First it was an acidic smell, then a slight itching of the throat, a burning sensation as I sucked in the air. This was Bhopal, and history had come to visit.

I was looking for an innocuous pipe, one of a maze that juts out from Bhopal's plant. The leaking pipe still stands, 24 years after it spewed toxic gas into nearby slums, killing at least 8,000 people in one of the world's worst industrial disasters.

In search of that pipe, I had strolled through this plant just outside the city with a government permit in hand, accompanied by a bored-looking policeman and my guide, Sanjay.

By an old rusty tank near one of the plants, I suddenly smelt something acidic, what survivors had told me hit them as clouds of gas drifted over their homes before they started choking, panicking, and going blind.

"It smells like benzene," said the policeman, as if that piece of wisdom would reassure me.

I was later told the odour could be from a chemical used to make Sevin, the pesticide then manufactured at the plant by U.S.-based Union Carbide Corporation.

If ever there was evidence of bureaucratic inertia, legal squabbling, and corporate wrangling, it was that nearly a quarter of a century after the tragedy the smell of untreated chemicals still lingered.

Around midnight on Dec 3, 1984, some other chemicals used to make Sevin accidentally mixed with water and sparked a chain reaction that led to half a million people being poisoned by gas.

Aside from the cobwebs and rust, the plant is much the same as it was in 1984. More than 300 tonnes of waste, left lying around in drums, were only stored in a warehouse in the complex three years ago.

AN ORPHAN
Sanjay guided me. He had survived the tragedy when he was a baby. His parents and five brothers and sisters died. He grew up in an orphanage, and in a story of a life against the odds, has now applied to take a master's business degree.

"The first time I came here I was so scared," he said as we strolled along a dirt path between plant buildings.

"This was the factory that killed thousands of people, my parents. Now I don't mind, I'm used to it."

I didn't believe him. He spoke often that day of his family, his brothers and sisters, a mum and dad who must have nursed him, played with him for just six months.

Two of his siblings survived the disaster. A sister is married and a brother committed suicide a few years ago.

As we walked, I imagined a 6-month-old baby, probably crying, perhaps left under a blanket by the mother, alone in a slum in one of the world's toughest places to live. And now he spoke fluent English, had girlfriends and ambitions.

We strolled on outside. It was a spring day. I could hear birds singing and kids laughing, somewhere by the compound wall.

Inside, though, the complex is the kind of place you imagine after a biological attack, where everything is suddenly abandoned.

Bottles of chemicals covered in cobwebs still lie in laboratories. Plant safety warning signs still hang from walls. Abandoned tables remain in place. A beehive has found a home in the roof of one plant building.

But if time stood still, pollution may not have.

Environmental campaigners say thousands of tonnes of waste lie underneath, seeping into ground water of nearby slums and causing clusters of diseases, from cancer to birth deformities.

The government says the plant's toxic residues have almost disappeared, washed away after years of monsoon rains.

We entered the control room, treading carefully to avoid broken glass and cow pats where technicians once stood. Outside were patches of ground where grass still failed to grow after 24 years.

We arrived at the tanks where the killer chemical was stored just before the disaster. The tanks lie in undergrowth, looking like a disused locomotive.

Many poor migrants arrived here 24 years ago because the land was so cheap after the disaster.

Here, the government has even painted water pumps red, saying they are not safe. Most locals do refuse to drink it, but still use the pumps for bathing. Young children play in the water.

Next to the slum is the factory's evaporation pond, where toxic waste was once dumped. The liquid was left to evaporate, leaving a sludge. It still overflows in monsoons. Sanjay said he saw kids wash their bottoms in it after defecating.

The trouble is there so far is no smoking gun, no long-term health study that can tell 100 percent why these people are ill.

So everyone here lives in doubt, wondering if something invisible is quietly killing, deforming their children.

"I am scared for my children," said Anees Ahmad Nawab, a carpenter. "I don't know what is lying within that factory."

-By Alistair Scrutton
By Bhopale - December 24, 2008 No comments:
Email ThisBlogThis!Share to TwitterShare to FacebookShare to Pinterest
Labels: Gas

After the Bombay incident of 11/26, Bhopal duly participated in the prominently media covered show of anger. Obscure,  remote and never heard of locations of Bhopal were flashed on news papers when candles were lighted in rememberance  of the martyrs of Bombay.

Meanwhile, Rab Ne Bana Di Jodi is a hit. India won the test match, after winning the one day. In between there was a planned T20 World cup, which was canceled due to another 24 hours live telecast event which lasted about 60 hours. The excitement, the media coverage and the discussions were almost the same. In place of asking 'Kitne run hue' we asked 'aur kitne bache hain?'. The delay in commando operation was similar to the delay of Ganguly coming for toss. After 20 odd days, everybody is planning for New Year party.   Non-state actors trains a person to kill 17 Indians on average. Send 10 such persons, you get 11/26. What if they sent 100 such persons ? Then also nothing will happen. People will watch Chandni Chowk to China in record numbers and get on with life. We have achieved what Buddhist monks call Zen. Nothing or nobody can make us angry. Say Non-state actors sends 1 lakh persons tomorrow on some Cruise ship to Bombay. Each one takes on 17 Indians. 17 lakh Indians will be minus. I am sure, the rest will watch Billo Barber.

Dilip D'Souza wonders in his post "I mean, take the killings of 3000 innocent Indians in Delhi in November 1984. Have we had a Parliament session to unitedly condemn that tragic outrage? Had we said about that atrocity that "we will take all action to protect our citizens"? Or that it is an attack on our "civilisational ethos"? Or that those perpetrators must learn about the "cost" of "killing innocent Indians"? Did that massacre prompt calls to "change how we view the lives of individual Indians"? Did ordinary Indians get killed then, and if so, did their lives go in vain?"

He however does not talk about December 1984, which is taken up by Latha Jishnu who says "The International Campaign for Justice in Bhopal (ICJB), a solidarity of volunteers fighting for redrresal, says around half a million people were exposed to the gas and over 20,000 have died so far as a result of their exposure. Among the 150,000 seriously affected, at least 50,000 are too sick to work for a living. Worse, children born to gas-affected people suffer from serious congenital defects. Some have no lips, ears or noses, others no hands or feet."

Meanwhile the general citizens went about there business as usual and voted Shivraj Singh Chauhan, not necessarily BJP, to power again. There were reports  in the local media about the lathi welding policemen of Bhopal and elsewhere in the state of Madhya Pradesh and how they would take on the AK 47s, to which many cynics said that Madhya Pradesh is the shelter of the terrorists and will never be attacked! Some others took solace in the fact that Bhopal might be too small a place for terrorists to take notice of. They said “A friend of mine sent me an email from Beijing asking whether I feared for my life in Bhopal after the Mumbai terror attack. I replied by saying no because the terrorists target big urban centers to make a statement. It is unlikely they will target smaller towns”. However, the new Chief Minister of Madhya Pradesh appears to have a different opinion, and has approached the new Home Minister of India asking for a NSG center at Bhopal.

The Bhopali, as indeed all Indians, are more busy with their survival, till some terrorist somewhere gets them. As the one and only Prem Panicker puts it " The ‘spirit of the Mumbaikar’ meme be damned, the state needs to recognize this for what it is: helplessness. We go to work come hell or high water [where Bombay is concerned, hell and high water, literally so] because as long as we are alive [over 80 of our fellows, going about their usual business 12 hours ago, are no longer alive—spare them a thought, a prayer], there is nothing else to do; nothing else we can do. We go to work not to prove a point, but because there are no options. We go to work like we breathe—because there is nothing else.Respiro, ergo sum."
By Bhopale - December 17, 2008 No comments:
Email ThisBlogThis!Share to TwitterShare to FacebookShare to Pinterest
Labels: Contemporary