Bhopal : A Prayer for Rain, a film on the Bhopal gas tragedy of 1984, was declared tax-free in Madhya Pradesh by chief minister Shivraj Singh Chouhan. "Such tragedy should never take place in any city of the world and development should never take place at the cost of human being's existence," he said after watching its premiere at Ashima Mall, a local Cineplex on the occasion of 30th anniversary of the world's worst industrial disaster. Chouhan also praised the director and actors of the film for their "heart-rending" performance. However Mr. Babulal Gaur, Home Minister of the state, accompaning the Chief Minister claimed that the film was in favour of Warren Anderson. He said that the film praised Warren Anderson and blamed the local officers of the factory for the mishap. He also said that the film depicts Union Carbide adhering to the local laws in all other countries of operation, which is wrong.

Wary of litigation issues, the producers of 'Bhopal: A Prayer for Rain' have obtained an insurance coverage for the film that, according to sources, runs into US$100 million. Director Ravi Kumar, who was in Bhopal for the film's premiere, said they wouldn't have gone ahead with the release in the absence of an insurance cover. "We have insured it for millions of dollars. The producers are taking no chances as there is a palpable pressure from various quarters. The insurance is a safeguard against any legal suits against us. A part of the proceeds will go to Sambhavana Trust that works for victims of the 1984 Bhopal gas tragedy," he says, without disclosing the exact amount.

Interestingly, in a report dated 20 April 2010 Satinath Sarangi, managing trustee of the Sambhavna Clinic, said "There is not a single Bhopali with upright moral standards in the script. Of course the people of the city are going to be angry. They are made to look comic, corrupt or passive victims"

The movie itself opens with the disclaimer: “Based on true events but certain cinematic liberties have been taken for dramatic effect.” However, the result is neither a work of gonzo journalism, nor is there the dramatic punch of “cinematic liberties”. 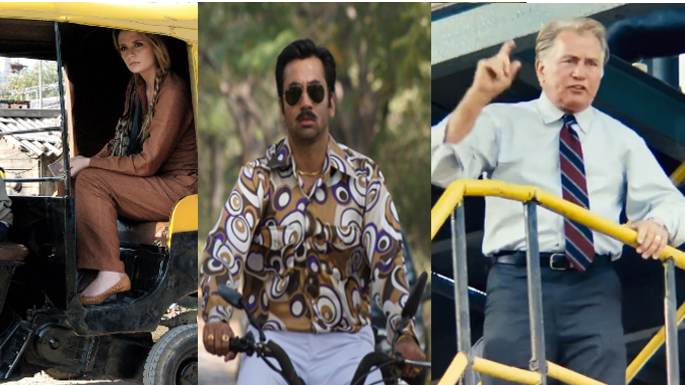 Sheen plays Warren Anderson, the chief executive of Union Carbide, headquartered in Danbury, Connecticut. Barton plays Eva Gascon, a fictitious reporter from Paris-Match who learns of the problems at the plant from a local journalist, Motwani played by Kal Penn, but decides not to publish a story. Journalist Motwani in the film, senses there’s a terrible tragedy brewing at the Union Carbide factory, but given his florid dress sense and wild reporting style, no one takes him seriously.

Anybody aware of the Bhopal proceeding can relate the character with Rajkumar Keswani, a highly respected Senior Journalist of Bhopal, who continues to be a strong,logical and much respected voice on the Bhopal Gas Victims. Rajkumar Keswani, said reading the script had been "very painful". He said "My sincerity, integrity and commitment has been distorted and trivialised [and] other characters of Bhopal have not been treated fairly. Now [Anderson] basically blames everything on the Indians and walks away".

Tim Edwards, of the International Campaign for Justice in Bhopal, said that despite serious flaws the film's script was "not all bad. "It depicts the cost-cutting regime imposed by the parent UCC on subsidiary UCIL pretty well. There is also substance to the depiction of local management culpability. Overall, [the film] does make [Union] Carbide look like white-man's-burden colonialists who put big dreams and profits before practical worker health and community safety," he said. However, Edwards said that the film "glossed over the degree of control and responsibility of US officials" and failed to portray strenuous efforts made by representatives of the workforce to get improvements on safety, particularly after a series of accidents and the death of at least one worker at the plant in the years before the accident.

Hazra Bee, a resident of Bhopal whose grandchildren suffer serious birth-defects said that enough films had been made on the events leading up to the tragedy. The most important thing now was to highlight the ongoing consequences of the disaster, she said.

The report mentioned above appeared in The Guardian dated 20th April 2010. Presently the link says "This content has been removed as our copyright has expired". You can read the article here
By Bhopale - December 10, 2014
Email ThisBlogThis!Share to TwitterShare to FacebookShare to Pinterest
Labels: Bhopal, Gas, India