Aamir Khan's home production Peepli Live has been mostly shot in village Badwai of Raisen district very near Bhopal. Reports go that the song Mehangai Daayan Khaye Jaat Hai  from the film, has become so popular with the audiences that political parties were vying with each other to buy the rights of the number. The song's popularity soared when BJP leader L K Advani reportedly called on Khan to sell them the rights of the song. “The Opposition wants to use it as their theme song for the forthcoming Bihar elections,” said our source.Even Laloo Prasad Yadav has his eyes on the song. He's believed to have said that this is the best song on rising prices he's ever heard. However, Aamir Khan, Producer of the film refused to play the ball with politicians and kept the number solely for his film.
Were these reports part of the promotion program of the film? No body is telling.
Meanwhile, the singers of the song were apparently unhappy with the amount paid for their work.Gayaprasad Prajapati, a teacher from the village Badwai in Madhya Pradesh, has penned the track and sung it along with his troupe. "The crew had come here for shooting and said they want to use the song which I perform with my troupe. Me and the 11 singers were only given 1100 rupees. I feel that it's not a justified amount to be given to a musician, and that's why I have raised my voice against it. We want to be paid Rs 11 lakh", said Prajapati. Aamir Khan got hold of the situation and resolved it by settling the issue at Rs. 6 Lakh and asking them to perform live during the music launch.
Is it so difficult for the political parties with so many village level workers to  pick  up  rural talents to pen their campaign songs?
The movie was mostly shot in village Badwai of Raisen district near Bhopal at a cost of Rs 6 Crores, stars Omkar Das Manikpuri, Raghubir Yadav, Nawazuddin Siddiqui, Naseeruddin Shah and Malaika Shenoy in the main roles.The film has already made waves at Sundance  and other film festivals abroad and is expected to be released all over on August 13.
Written and directed by debutante director Anusha Rizvi, the film is a satire on the farmers' suicides and subsequent media and political response in the country.
However a more interesting person related to the film is Mahmood Farooqui, the co-director and the casting director of Peepli Live. Mahmood Farooqui studied history in India and at the university of Oxford as a Rhodes Scholar. Over the last four years he has worked to revive Dastangoi, the lost art of storytelling in Urdu, also known as Dastan-e Amir Hamza.
Now as Bhopal has figured in the radar of this talented couple, here is hoping Bhopal gets a performance of the Dastangoi some time soon.
By Bhopale - July 14, 2010 1 comment:
Email ThisBlogThis!Share to TwitterShare to FacebookShare to Pinterest
Labels: Contemporary

Sultan and Jamuna: Now in Bhopal 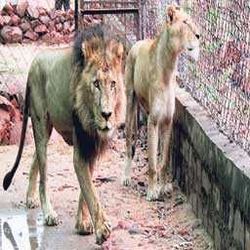 The Van Vihar National Park in Madhya Pradesh's Bhopal city has become the new home to a pair of lions, which were rescued from a circus over four years ago and are relocated here as a part of the rehabilitation programme.

The majestic felines, a male named Sultan and a female named Jamuna, who were kept at the Kanan Pendari Zoo in Chhattisgarh's Bilaspur District after being rescued from a circus in 2006 were brought to this place on Thursday.

"These lions have been brought in from Kanan Pendari Zoo at Bilaspur. The male lion is named Sultan and female one called by the name of Jamuna. They were kept there after their rescue from Raj Mahal Circus in 2006," said J S Chouhan, Director, Van Vihar National Park.

"Most of the lions, which were rescued from the circus, are already brought in here. Only these two were left and now under the instructions of the Central Zoo Authority they also have been shifted here," he added.

For around a month, this pair would be quarantined and kept under constant medical examination before letting them to join the pride of other lions at Van Vihar.

"Right now, we won't display them as for now. They would be kept in quarantine almost for a month. We maintain their veterinary records and according to that we would give all the required vaccinations," said Dr. P K Chandan, Veterinarian Kanan at the Pendari Zoo, Bilaspur.

"We would do what ever is required to do in the quarantine period," he added.