The Legacy Lives On

A legacy of the famous Begums of Bhopal may help usher in social reforms by sparing Shia families the exorbitant expense of weddings. The All India Shia Muslim Personal Law Board today announced it planned to issue a directive to community members to ensure that all Shia weddings take place in local mosques. Board chief Maulana Mirza Mohammad Athar said the directive was part of its national policy. If the directive becomes reality, it will reduce the cost of marriages by almost half. Most marriages are now held in expensive marriage halls and hotels where the bride’s family has to bear the cost of decoration, furniture, electricity and the feast, as well as pay the Qazi’s fee. So far, Bhopal was the sole exception, solemnising marriages inside mosques. The tradition of the nikah taking place in mosques in Bhopal dates back well over 100 years to the time three begums — Qudasiya, Shahjahan and Sultanjahan, all Sunnis — introduced sweeping reforms in Muslim society under their rule.

Even now, during the peak marriage season in winter, spring and autumn, dozens of nikahs are held inside Taj-ul-Masjid, Moti Masjid and other well-known mosques in the Madhya Pradesh capital. 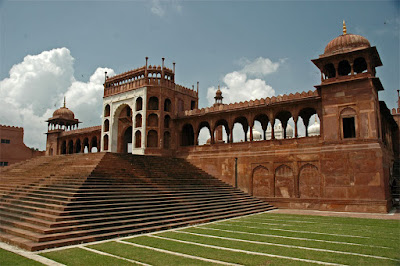 The nikahs are generally held before sunset and cost little. On most occasions, the guests are served laddoos or given a small box of sweets or dry fruits. Maulana Athar said the board planned to announce the “mosque-only nikahs” for the Shia community at its October 25 meeting in New Delhi. “We hope this will be passed in the meeting,” a cleric on the Shia board said. The Maulana told The Telegraph that mosques were regarded as “Khuda ki ghar (house of God)” and, therefore, marriages held there would have a different kind of sanctity. “There are countries in the world where mosques are major centres of marriage,” the Maulana said. “Modern-day marriages are extravagant. They impose a huge financial burden on the parents of the brides and grooms. We must stop this.” He added: “Let us admit that Muslims are engaged in a competitive show of pomp and wealth over marriages along with other communities. But Muslim marriages are supposed to be simpler and quieter.”

Families can still choose to have a reception for their guests, but it will no longer be obligatory if the nikahs are solemnised in mosques. Privately, many Shia and Sunni leaders in Lucknow and Bhopal said they were happy that community leaders were trying to accelerate social reforms even if it meant taking a leaf out of old customs and traditions.

This good initiative, requires support from all. Let us do it for Bhopal. All comments about proposed course of action are welcome at the blog.

By Bhopale - October 21, 2009 No comments:
Email ThisBlogThis!Share to TwitterShare to FacebookShare to Pinterest
Labels: Contemporary 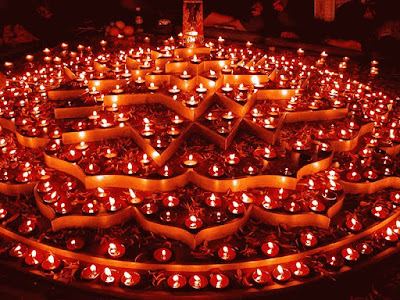 Bright, Sparkling, Glowing, Shining, Incandescent, Luminous.
May your year ahead be as bright as this Diwali
By Bhopale - October 16, 2009 No comments:
Email ThisBlogThis!Share to TwitterShare to FacebookShare to Pinterest
Labels: Contemporary

As said in an earlier post Allama Iqbal had an intimate relationship with Bhopal. Bhopal boasts of an Iqbal Maidan, and a monument dedicated to the Iqbal's legendary Shaheen. A "Yome Iqbal" or Iqbal festival is organised traditionally on 21st April. The Government of Madhya Pradesh has also instituted an award for Urdu literature by the name of Iqbal samman, which is the biggest award and probably the only one surviving for the Urdu literature.

According to PTI, after Jinnah, Iqbal, who penned the famous song 'Sare Jahan Se Achha' has come on the radar of saffron brigade with a BJP MLA demanding scrapping of 'Iqbal Samman' on grounds that it was the poet who had first advocated for the two-nation theory. "Iqbal had advocated the two-nation theory and it was he who had sown the seeds of division in the mind of Pakistan founder Qaid-e-Azam Mohammad Ali Jinnah," BJP leader Girija Shankar Sharma told PTI. Iqbal was also the 'Spiritual Guru' of Jinnah and he played a "more crucial role" in creating Pakistan than the latter, Sharma, representing Hoshangabad, alleged. "I have also written a letter to the State Chief Minister Shivraj Singh Chouhan and the party leadership demanding that the award in the name of Iqbal be scrapped.

Let us hope that this is an attempt to gain two minutes of fame by Mr. Sharma.
By Bhopale - October 10, 2009 No comments:
Email ThisBlogThis!Share to TwitterShare to FacebookShare to Pinterest
Labels: Person

Madhya Pradesh boasts of a rich cultural heritage, biological diversity and architectural splendour. However, it's potential as a premier tourist destination had not been tapped until recently. The turnaround happened as a result of the “focussed, growth-oriented strategy” of the Madhya Pradesh State Tourism Development Corporation Ltd (MPSTDC) headed by Ashwani Lohani (check his blog). When he took over as Managing Director in June 2006, the MPSTDC was on the verge of being dissolved. Since then it has bounced back as the “heart of Incredible India”. It's good to see state governments in India promoting tourism. The oldest cave paintings in the world, the oldest Buddhist stupa in the world and the largest wildlife sanctuary in Asia are all trying to invite travellers to come and visit Madhya Pradesh for sightseeing.

In 2006, Madhya Pradesh Tourism had released an ad called 'Bioscope’, which presented shots of the attractions of the state, apparently viewed through a bioscope. It invited travellers to come and visit the state, the shots strung together by a narrative. Now, after three years, another ad makes use of ‘eyes’ as the creative route to express the awe travellers experience in Madhya Pradesh. The eyes narrate the journey of the traveller and are complimented by a poetic song in the background. When the narration in the background is about sights one would see from a train, the model’s pupils become the wheel of the train, or if the narrative speaks of an antelope, the model’s eyebrows take the shape of its horns. Similarly, in the pool of her eyes, the viewer gets to see the intricacies of the Sanchi stupa. Both ‘Bioscope’ and ‘Eyes’ have been conceptualised by Ogilvy India.

Keeping the focus on just a pair of eyes, the creative challenge was to have the eyes move to music and lyrics, reacting and mimicking to the myriad varied and rich travel experiences through Madhya Pradesh. The list include the ever elusive tiger, the rare swamp deer Barasingha, the white marble hills at Bedaghat, the prehistoric cave paintings at Bhimbetka, the erotic sculptures in the land of Khajuraho, the melting pot of Buddhism, Hinduism, mosques, minarets, majestic forts, palaces and so forth. The attempt was to keep the eye movements as natural as possible and keep the transition between the real and CG movements seamless. The spot requires a definite combination of live shoot and CG interception but keeping to the same innate and finesse of the subject matter.

When MFX first got the verbal brief, the execution began quickly on tests to identify possible visual directions. Ideas bounced between both teams. Among those deliberated upon were digital face projections, CG objects with stills and CG replacement over live shots. Eye actions were carefully plotted to the script and a quick eye animation was done for study and reference purpose. With various execution methods in line, the team puts together results and issues and studied the production pipeline to allow us to achieve client requirements.

The eyes remain the strongest visual backbone; it was inevitable that the search for the pair of “eyes” was most arduous. The team filtered through databases of talents as well as various groups of Indian classical dancers, targeting on the skill and flexibility of the talent moving their eyes. That was how MFX finally zeroed down to Shree Jeilachmee Appadorai, a Malaysia based South Indian model who has learnt Bharatnatyam and other Indian classical dances. Her natural brown eyes together with her ability to express through eye movements made her the perfect choice for the spot and also allowed us to revisit our execution. With her selected, we were able to remove all concerns with regards to not having the right talent in such a short period of time.

Pre production took up two weeks while the shoot was completed in one day. The technical aspects of the spot entail a large scope of detailed compositing work. It begins with stabilizing the shots, keeping the objects central in the frame and then matching shots from one to the other. Subtle morphing techniques were implemented to smoothen out the transitions, and computer generated camera movements were added to the otherwise still base plates. The ‘Barasingha’ eyebrows were created with matte painting and warping effects were injected on it for the transformation act. At certain portions of the film, the irises and pupils were replaced with 2D animated ones (for example when the song speaks about the journey in a train, the pupil of the model become the wheel of the train) which were carefully blended back into the base plate to ensure a seamless tapestry. As the camera travels into the iris, multi layering in 3D space takes action concocting the intricacies of the Sanchi Stupa. Coming towards the final Buddha piece, the face make-up made the base for the glistening Buddha face, however, much of the final look, shine, and shades were finished digitally.

Though it is largely a technical piece, MFX adhered to keeping aesthetics a priority. The concept of keeping the film piece minimal and emphasizing much on the eyes was a constant reminder to the team – thus steering the digital solutions within this scope. The team indeed tried to give the eyes greater animated movements; however, there was always a concern of how much and how little, also how unreal it may eventually become. MFX resolute to not cross the “excessive CG” border and opted for a simplistic seamless blend with live shots, which is also the core of what the creatives wanted at O&M.
By Bhopale - October 08, 2009 No comments:
Email ThisBlogThis!Share to TwitterShare to FacebookShare to Pinterest
Labels: Contemporary
Newer Posts Older Posts Home
Subscribe to: Posts (Atom)